Posted on September 3, 2014 by jerblaber

Deep within the German state Baden-Württemberg – with its Black Forest and nationally-renowned high-culture institutions – exists football club TSG 1899 Hoffenheim. The story of Hoffenheim is quite intriguing, and it’s one that is unlike any other. In the early 1990’s, this was an amateur side playing in the eighth division. They had moved up three tiers by the time 2000 hit, but they were still an amateur club, toiling away in the fifth division, with no real ambition or expectation.

Then, money happened. With SAP co-founder Dietmar Hopp’s financial backing, the club began its steady ascent into the upper echelon of German football, winning successive league titles and qualifying for the DFB-Pokal quarterfinals in 2004 – as a technically semi-pro third-division side. Hoffenheim were promoted to the second division in 2007, and their mission was accomplished a year later, as they participated in their first Bundesliga season in 2008-09.

If you like your football played at approximately 150 miles-per-hour, you should make time to watch a Hoffenheim game. The Rhein-Neckar-Arena side score a lot of goals and concede nearly as many. Last term, their 72 goals were good for third in the Bundesliga, behind only Bayern and Dortmund, but their 70 goals conceded were exceeded only by Hamburg and Nürnberg. To put that into perspective, the former finished 16th and the latter suffered relegation. Hoffenheim finished ninth, which oddly seems about right.

At the center of coach Markus Gisdol’s dazzling attack is Brazilian midfielder Roberto Firmino. Obviously known to Bundesliga followers as well as hardcore FIFA players, the 22 year-old cracked open German defenses as if they were walnuts in his breakout 2013-14. Playing as a central attacking midfielder behind Anthony Modeste and to starlet Kevin Volland’s left in Gisdol’s preferred 4-2-3-1, Firmino accounted for 38% of Hoffenheim’s 72 goals, scoring 16 on his own (placing joint-fourth in the league) and setting up 11 others (second to Marco Reus).

Watching Firmino play is like watching some mutant ballerina-tornado combination: he twirls, he runs, and whatever is in front of him turns to dust once he’s through. Firmino’s pace, finishing and general flair make him as potent a threat in the final third as anyone in the Bundesliga. Firmino ranked only 13th in the league in key passes last season, but he still averaged 2.1 per game. And he left this realm of existence by completing 4.5 take-ons per contest (which ranked only third in Germany – the Bundesliga is so cool).

Over the weekend in Bremen, Firmino did Firmino things during Hoffenheim’s 1-1 draw with hosts Werder Bremen. He was all over the pitch, registering five shots, scoring a spectacular no-look goal, and completing eight of his twelve take-ons. 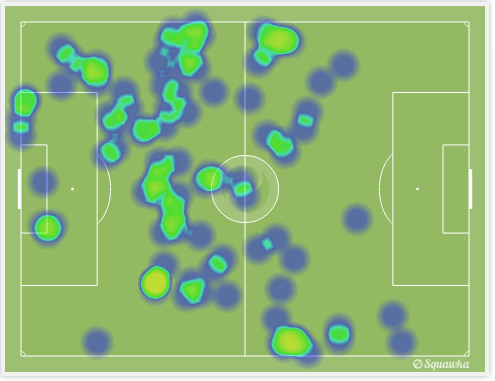 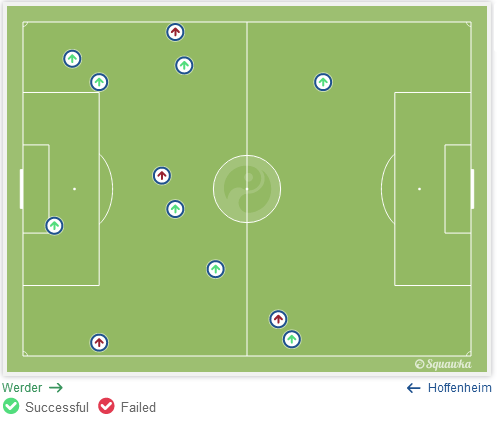 If there are holes in Firmino’s game, they are few. He doesn’t possess a super-high pass-success percentage (75% for his career), yet his stealth and imagination allow him to deliver terrific passes. He doesn’t tackle that well or win too many aerial duels, but does he really need to? Seriously. Look at the turns he can make!

Normally, a player of Firmino’s caliber would be linked to the national team or a move abroad. (Look at the comments on that YouTube clip regarding the latter. You’ll see what could be considered great trolling or woefully misguided fanaticism.) But neither of these things have happened to young Firmino. For one, while the Brazilian NT is an inherently flawed entity, attacking midfield talent is not something it lacks. Philippe Coutinho, Lucas Moura, and Oscar are all Firmino’s age or younger, and all are above him in the pecking order at this point in time.

This brings me to my second point: while Firmino had been building to a breakout season for a few years, his 2013-14 campaign was his first dominant one from start to finish. The big clubs abroad didn’t do a great job scouting this guy prior to last year, so credit to Hoffenheim for holding on to Firmino and persuading him to put pen to paper on a new three-year deal. That contract was signed earlier this calendar year, and now the club will likely not part with him for less than €25 million. But now that he’s made it, one more terrific season should lead to increasing press coverage and intense speculation regarding potential destinations.

For now, however, Hoffenheim will reap the rewards of keeping Roberto Firmino, a bonafide Bundesliga star. He’s a name to watch this season, and if his first tally of the 2014-15 season is any indication, many, many more people are going to know his name by next summer.