Marseille and the Bielsa Equation

It’s only been only three games into Marcelo Bielsa’s tenure with Olympique Marseille, so jumping to conclusions on many levels is ridiculous, even bordering on stupid. Bielsa had his issues in domestic league play over his two seasons with Athletic Bilbao, but he did good things in tournament play during the 2011-12 season with Bilbao’s run to the finals in both the Europa League and the Copa Del Rey. His last season with Bilbao was surrounded by the cloud of the unknown, with transfer situations surrounding Javi Martinez and Fernando Loriente.

Athletic Bilbao finished in mid table obscurity under Bielsa, finishing 10th in 2011-12 and 12th in 2012-13. Something I did was look into some of the underlying numbers with Athletic Bilbao under Marcelo Bielsa. Here are Bilbao’s numbers from 2011-12: 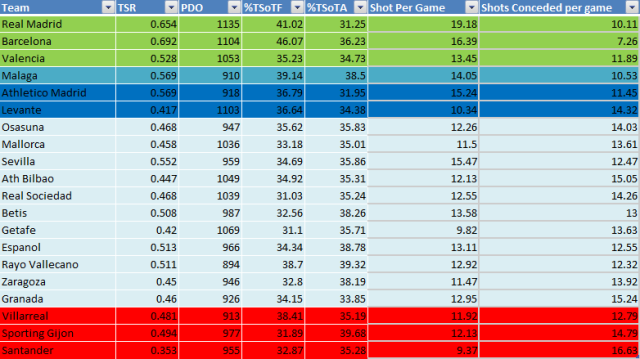 What you notice with both seasons is pretty subpar shot differential numbers. I’m obviously not privy to expected goal numbers from La Liga and I’m certainly don’t even have a model that could fire up these sort of numbers, but it’s pretty interesting to see the stark difference in the amount of shots that did hit the target from those two seasons (SoT stands for Shots on Target). That may have contributed to Bilbao having a high PDO one yr and an average one the next. Just for kicks, here is Bielsa’s two seasons with Athletic compared to the 2013-14 seasons under current Bilbao manager Ernesto Valverde:

Marcelo Bielsa’s fame is lent much more towards his work with Chile and how he’s instilled a philosophy with the Chilean National team during his time as manager. Lots of pressing, full backs bombing down the field and at times acting more so as wingbacks, and more than anything a tempo that many attempt but few accomplish. His work could be seen with Chile’s current iteration, and how it won plaudits from many neutrals during their run in the World Cup. They played three at the back, with Mauricio Isla a lot of times playing as a RWB/RM while Gary Medel played a lot as the team’s CB.

And so far in his tenure with Marseille, we can see that he’s not going to deviate too much from playing with three at the back, and it’s produced disappointing performances (Montpellier) and solid performances (Guingamp). Marseille played something resembling a 3-4-3 vs Guingamp with Brice Dja Djedje playing in the Mauricio Isla role as the RM/RWB hybrid. Marseille in the second half even tried having Andre-Pierre Gignac operate much more as a RW in the 3-4-3 and it produced this:

Meanwhile Marseille’s TSR of 0.626 through three games this season is light years ahead of where it was last season when they finished in the upper mid table:

Their current mark will obviously regress because well… Bielsa never even cracked a TSR >.500 with Athletic Bilbao, Marseille lost a very solid playmaker in Valbuena this summer (his playmaking numbers probably had a decent effect on Marseille’s ability to hit the target with their shots last season), and the highest TSR posted last year was still less than Marseille’s current mark.

I’ve greatly enjoyed Bielsa’s previous work with the Chile National team and how his ideologies have been passed on their current manager Jorge Sampaoli, but can Bielsa succeed as a domestic league manager? So far we don’t have much evidence to say he will, but it’s very early into his stint with Marseille. CB depth is a issue with Marseille and assuming Bielsa will stick heavily with a three at the back formation, getting a CB or two will be imperative. I can’t tell you how this experiment will work out, but it’s going to be really fun to see it unfold.

Marseille supporter, #FancyStats supporter. Troller of all things Twitter. I write words and hope they make me sound SMRT
View all posts by Moesquare →
This entry was posted in Analytics, Features, Ligue 1, Uncategorized. Bookmark the permalink.

1 Response to Marseille and the Bielsa Equation