Leicester are a Freak, and That’s it 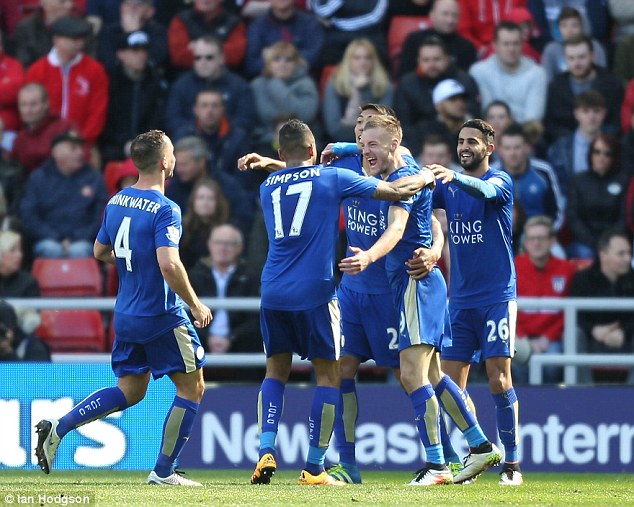 Sit down, grab a seat, make yourself comfortable.

So if you have been hiding under a rock, Leicester have won the Premier League title. Leicester who had the 17th best odds to win the title at 5000-1 actually did it. The same club that were hanging by a thread at this time last year will be hosting Champions League matches next year and at the very least will play host to one of the biggest clubs in the world. Even the most ardent of Leicester critics will acknowledge that this is the greatest team achievement in PL history. Hell it’s the greatest team achievement in English football history when taking into account the rigidity of the PL hierarchy. This feat should be celebrated, told as a sort of folk tale for generations to come. We should all tell our kids that we once saw Gary Lineker host Match of the Day wearing only his underwear.

I was watching Monday Night Football yesterday and they obviously talked about Leicester winning the title. One of the remarks being made was about how smaller clubs will now have the belief that they could do a Leicester, which almost made snort with laughter. Let’s get this out of the way: There’s almost nothing in Leicester’s title run that teams can take and replicate. Certainly you can look at their scouting for talent and maybe pick up some hints here and there on how to scout on the margins but outside that, this was built on variance of the highest volatility.

Leicester’s penalty differential of +8 is the 2nd highest mark that I could find on record in the PL over the last decade, with only Chelsea from 12-13 beating it. There have been numerous clubs who achieved that +8 mark, with 13-14 Liverpool being the last one. In some ways that Liverpool side were a template for how so many things can go your way in one season. While not to the same extent, they did have injury luck in the sense that their major players were pretty healthy (I mean they somehow coaxed over 2000 league minutes from Daniel Sturridge that season). Liverpool had sky high conversion rates, had no European football to deal with and were eliminated from domestic cup competitions early. Add to that their similarities in how they attacked with pace and both sides being powered by goal scoring duos, and Liverpool were almost an older brother to Leicester. And look what happened to them the next year: Their conversion rates dropped from sky high to borderline rock bottom, They lost the best PL player since Ronaldo in Luis Suarez, they suffered from numerous injuries including Daniel Sturridge and bottomed out in the Europe League spots. It isn’t hard to see how Leicester who were built on similar methods could break down in the same way going forward.

The idea of teams now thinking that they can move upwards in the PL is somewhat naive. Want to know how hard mobility in the PL is? Look at Southampton. Southampton were pretty average in 12-13 finishing lower midtable. And then boom: 8th in 13-14, 7th in 14-15, and as currently stands 7th again this season. Going from bad -> decent for a small club is hard but isn’t inconceivable. Going from decent -> very good is damn near impossible. Southampton have been stuck in 7-8th for three seasons with no end in sight. Everton were experts in the adage “close but no cigar” when it came to breaking the top 4 barrier. Don’t we all remember the year when Alan Pardew nearly pulled the greatest magic trick in getting Newcastle into the Champions League? This is my way of saying that your team won’t do a Leicester. Your team probably won’t even do a Southampton/Everton. Money talks and the correlation between wage bill and points is damn strong. Does it suck? Yes it does. But that’s life in the PL and it’s not changing just because Leicester pulled off the heist of the millennium. This isn’t a sign that the times are changing, this is just literally a freak thing that happened.

I don’t want to have this post just be demeaning Leicester because this is the greatest sporting achievement by a team I’ve ever seen, and it’s the greatest one of modern time. We can pick and choose other ones that vaguely resembled this. Atletico winning the double in 2014 was astounding, although Atletico did win the Europa League in 2012 and the Copa Del Rey in 2013. The USA men’s ice hockey team defeating the Soviet Union in 1980 was a huge shock, but it also was only a one game final and not a 38 gameweek marathon. Similar things can be said about Greece winning Euro 2004 and Denmark winning in 1992.

The closest comparison that could be made to Leicester is Montpellier winning Ligue 1 in 2012. Montpellier were a small club that previously only had domestic cup victories in 1929/1990 to their name, and they held off big bad PSG when they were in the beginnings of their Qatari rich era. It was wonderful, great and all that but now ask yourselves, did Montpellier really change French Football and usher in a new era? Or were they just an outlier that took advantage of what was in front of them and everything maintained its status quo afterwards? Now I’m not saying Leicester are going to be Montpellier because they have things that Montpellier don’t, mainly money. With the TV deal and Champions League money coming in, Leicester are in a much stronger state to keep all their players and add more in the summer to beef up for their contest in multiple fronts next season. Meanwhile Montpellier in the years after that miraculous title win basically sold everyone relevant from that team. That same fate probably won’t happen with Leicester.

Also we should get this out of the way: Leicester aren’t a bad team. I know that a lot of this post has been spent yelling about how this isn’t sustainable but it has to be mentioned that Leicester were a good team. This isn’t that Newcastle side from 2012 that performed some form of dark magic to nearly sneak into the CL. By looking at their shot numbers, their expected goal numbers and the overall talent of the squad they would project as somewhere between the 5-7th best team in England, which if that had happened still would’ve ranked as one of the 3-5 best achievements in the PL era. But instead that caliber of club got the breaks that propelled them from the Europa League Spots to something much more grander. Despite the luck, it is impressive that they were built in a way to take advantage of a lot of the big teams in England who were susceptible to high flying counter attacking football. Their performance versus Manchester City was extremely vicious and efficient, one of the great counter attacking exhibitions in years. Their ability to grind out one goal victories was commendable, even though its not really a repeatable trait to have.

There’s also the tiny chance that Leicester can learn from this season and have another great summer to gain stronger depth. Perhaps in the next two seasons, Leicester will have somehow clawed their way into being a club that could challenge for the top 4 like Liverpool/Tottenham and we’ll have a different discussion on them as a club. None of this is written in stone, but merely educated guesses. I’d have no problem raising my hand by 2018 and saying I was wrongly pessimistic about what Leicester could be as a club. I’m just skeptical that enough of what’s happened this season is strong enough on its own to be used as a springboard for future success along the same lines.

Leicester are a freak team. For a demanding style of play they were one of the healthiest teams in the league. No one of note on Leicester missed significant time due to injury. Their penalty differential was very favorable and if we took a hard look at penalty decisions throughout the year, you could argue that Leicester were perhaps even more luckier than their raw differential would suggest. They’ve had stretches when literally every shot they took went in, and other stretches where the opponent could take a shot from the 6 yard box and somehow miss. Combine all that with a league that saw Chelsea collapse, Manchester City meander around and Arsenal doing another Arsenal, and you had the recipe for something like this happening. Leicester should be celebrated (to a relative amount, they do employ Jamie Vardy after all) for achieving the possible, for creating the greatest sports story in modern history. Just don’t make them out to be some shining example on how football is moving in another direction.

Your team isn’t going to do a Leicester next season and that’s no shame, because Leicester probably won’t do this again next season

Marseille supporter, #FancyStats supporter. Troller of all things Twitter. I write words and hope they make me sound SMRT
View all posts by Moesquare →
This entry was posted in Analytics, English Premier League, Features. Bookmark the permalink.

3 Responses to Leicester are a Freak, and That’s it