Manchester City 1-4 Liverpool: What a Successful Gengenpress Looks Like 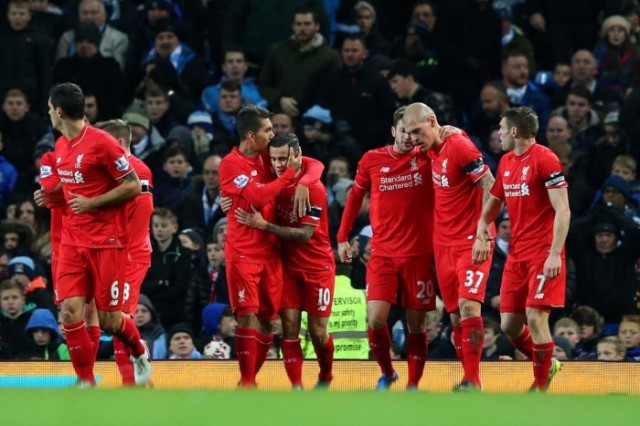 Liverpool’s 4-1 victory over Manchester City and the manner in which they did it harkened back to their magical 2013-14 season when Liverpool obliterated Arsenal 5-1 in February via the trio of Raheem Sterling, Daniel Sturridge and Luis Suarez. It was an incandescent performance in a season full of them. Saturday was obviously different in the most simplest sense, none of the three players from that 13-14 Liverpool side started against Manchester City but the performance by Liverpool was arguably better when taking into account a host of different variables.

Liverpool played what could be best described as a 4-3-2-1 with Roberto Firmino playing at striker. Coutinho and Adam Lallana played in behind Firmino while the midfield three continued with Can, Lucas and James Milner, who was the most advanced of the three. City played their usual midfield two in a 4-2-3-1 formation. 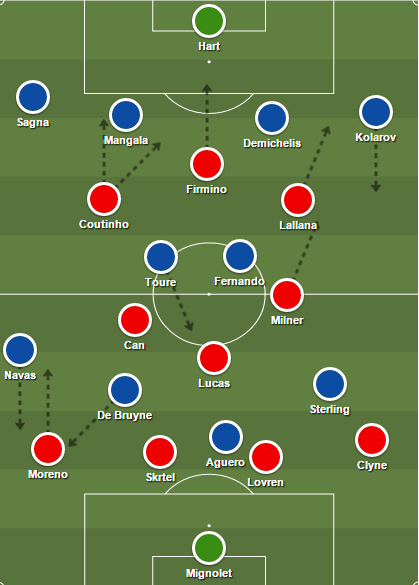 Counterpressing (or Gegenpressing to others) has become a buzzword of sorts to describe Liverpool’s pressing ever since Jurgen Klopp became the manager of Liverpool. In the most simplest of descriptions, gegenpressing is immediately pressing the opposition right after losing possession. The goal is to regain possession and in some cases, creating quick attacking moves from it. (Again, it’s a really simple description of the tactic and here it is in much greater detail). It’s something that gained a lot of publicity since Klopp’s arrival – not just because of his prior success in Germany but to how suitable and potentially revolutionary an effect it can have in the PL.

So far through Klopp’s tenure Liverpool have executed very well in terms of regaining possession immediately, it’s just that it hasn’t always created high level of chances afterwards which speaks to the mishmash talent Liverpool have. When Liverpool beat Chelsea, they were able to press Chelsea and regain possession which led to shooting opportunities but even the goals scored weren’t high grade quality

Against City though we saw the great attacking benefits of counterpressing, with the own goal from Mangala being an example.

Truth be told, Manchester City were already showing some defensive fragilities (we’ll get to that shortly) before the sequence of events leading up to Mangala’s own goal and it only got worse afterwards. Liverpool were more than willing to create these attacking moves from very deep positions on the field.

The second and third goals weren’t truly created by gegenpressing as those goals were more built off of a successful string of broken plays that fell Liverpool’s way – which then turned into wonderful team goals, particularly the second Liverpool goal from Firmino who got control of a loose ball situation and turned it into Liverpool’s second goal. But the first goal and a few near offside decisions immediately afterwards that could’ve been clear goal scoring opportunities were created from the principles of counterpressing and Manchester City had no answers to cope with it.

Normally when attacking midfielders are played as a #9 whether due to injury or by choice, they’re most likely given the label of being a false 9 and the team in question is playing a strikerless formation. Some of this is actual truth as we’ve seen teams play midfielders whose sole job was to come in deep and help out the midfield. Firmino’s performance deviated a lot from that because he didn’t just play like a false nine, he played like a genuine world class striker. Firmino has had experience playing as a striker during his time at Hoffeinheim but he was outstanding in numerous ways.

When Firmino wanted to help the midfield, he did so and at times in unusual yet very effective ways. Look how deep he comes to help Liverpool spring a counter that leads to the third goal.

It wasn’t just dropping deep to receive the ball, Firmino was also more than able to run behind the Man City offside trap and create chaos. On the offside decision just before the own goal by Mangala, you can see Firmino try and keep himself onside with the defensive line from City and be in position for a potential close range opportunity. 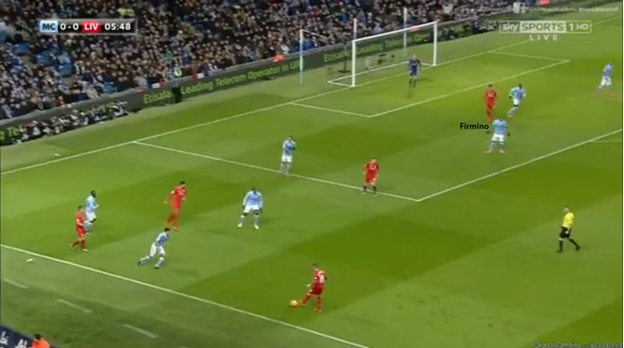 The goals and opportunities afterwards were a mixture of his willingness to come deep and receive the ball along with the movement of a striker to seek holes within the defense and make the perfect runs to cause massive danger. It was a brilliant performance and one that Liverpool have starved for from their strikers. Divock Origi has been terrible since getting playing time at striker, Benteke has been hit or miss and Sturridge is able to make the runs consistently that Firmino made but he’s often injured.

Firmino doesn’t project as a fulltime striker and long term, his future in Liverpool looks to be as one of the midfield two or three behind the striker depending on the formation but he’s shown that in certain situations, he can perform the duties of a #9 very well which speaks to his multidimensional skill set.

Outside the early season defeat to Tottenham, Manchester City have been dominant defensively and coming into the weekend, they were statistically performing at levels that haven’t been seen before in the Premier League over the last 6-7 seasons. Obviously this was a terrible performance and it showed one of the Achilles heels for their squad, which is the imbalance of their team defensively without Fernandinho.

Multiple times, the balance of Man City would be lacking. With Kolarov’s role to play high up the pitch combined with Toure’s lack of effort to track back, City more times than not looked like they were playing a 3-1-5-1 formation which played right into the hands of Liverpool’s pressing.

This have always been longstanding issue for Manchester City, it’s just that more times than not the imbalance domestically hasn’t been taken advantage of by opponents because either the monopolizing of possession led to goals or most opposition counter attacks would start so deep that it would eventually peter out when they got into their final third. The good news for Man City is that Tottenham, Liverpool and at times Arsenal are really the only teams that could punish them for instances like this in the PL.

This was by far Liverpool’s best performance of the season and it’s arguably the best performance by a Liverpool side over the last 3-5 seasons, including the near title incarnation of 13-14. Liverpool were brilliant in the way they were able to both create dangerous attacks from winning the ball high up the pitch and make goal scoring opportunities from recovering 50-50 loose balls. The latter isn’t the most sustainable over a 38 game season but it’s certainly devastating in one game scenarios. Coutinho played his best game overall not only as a goal scoring threat but as the talented playmaker that he’s capable of being while Lallana is playing his best stretch of football since his breakout 13-14 season for Southampton.

For Manchester City, this game was both a one off and a concern going forward. Man City played their backup CB’s and a back DM against Liverpool which contributed to their defensive issues and exasperated their problems. We have a decent sample size this season that Man City domestically are one of the top two defenses and they’ll be fine on the total aggregate. But against teams that press high up the pitch and expose the spaces in-between the back four and the midfield two, City have struggled and perhaps slowly but surely, PL teams will start to use a variation of what Liverpool did to create havoc instead of simply conceding possession and hoping to play counter attacking football from deep in their defensive third.

It’s only been less than six weeks since Jurgen Klopp was hired by Liverpool but already we’re slowly starting to see his vision of a gegenpressing high octane team come to the surface, which is a far cry from the static Liverpool side that was present in the final days of Brendan Rodgers’ tenure.

Marseille supporter, #FancyStats supporter. Troller of all things Twitter. I write words and hope they make me sound SMRT
View all posts by Moesquare →
This entry was posted in English Premier League, Features, Tactics. Bookmark the permalink.