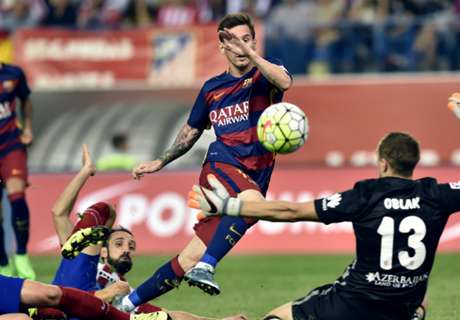 “I find that most people know what a story is until they sit down to write one.”

On Saturday, Atlético Madrid and Barcelona did battle once again. It was the third meeting in Madrid and the fifth meeting overall between the two rivals in the last eight months. Seeing as familiarity breeds contempt (and media attention), this was billed as the match of the season so far on the continent. Some viewed a handicapped Barça as underdogs against a much-improved Atleti team playing in Madrid. An early leg up in the title race was expected for the winner, and anticipation was heightened after Valencia beat Sporting Gijón and Cristiano Ronaldo went off for five against poor Espanyol earlier in the day.

The American writer Flannery O’Connor once said she found that most people know what a story is…until they actually sit down and try to write one. Such is the fluid nature of writing and storytelling. What seems like a foolproof outline or plan is sometimes shot to bits once an attempt to execute it is made. Whether through a personal oversight or the interference of an external force, it just happens.

You may recall that Atlético did not beat Barcelona last year. Didn’t even draw with them. Barça won four out of four against Atleti, knocked them out of the Copa del Rey, and clinched La Liga at the Calderón a few months later.

Diego Simeone knew the story. After four poor performances last spring and another €100 million spent in summer, surely the time was now to challenge the treble-winners and issue a statement of intent. After all, the top five were closer than ever last year; why shouldn’t the 2014 champions (and the teams beneath them) harbor title hopes once more?

You know the famous quote attributed to 19th-century French journalist Jean-Baptiste Alphonse Karr: “plus ça change, plus c’est la même chose.” The more things change, the more they stay the same. The more you think you know how to tell a story, the more you end up spouting gobbledygook. La Liga’s top teams get stronger, but cannot take down the kings. 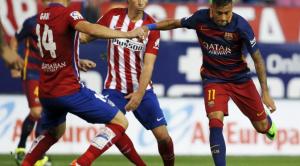 Indeed, Barcelona got the best of Atlético once again, rallying to a fifth straight win over the rojiblancos on Saturday. Fernando Torres opened up the scoring eight minutes before the hour, but it was nullified after only three minutes by a Neymar free kick. When Lionel Messi strolled off the bench after 60 minutes you just knew he would slot home the winner, which he did 17 minutes later.

The Catalan club were pressed but managed the standard 70% possession and a bevy of good chances in the second half, as Simeone ushered on new signing after new signing, gunning for the three points. Atlético were well-positioned after a tense, goalless, perhaps fortunate first half (referee Mateu Lahoz missed two potential penalties from Giménez handballs) and went ahead after a sumptuous ball from Tiago found its way through to Torres, who duly converted off the back post.

Coming up on the hour mark, things were peachy for Atlético. All three subs remaining, Messi still glued to the bench after his wife gave birth to another child on Friday. Suddenly, Neymar stepped up for a free kick after he was cut down by Antoine Griezmann just outside the box. The Brazilian subsequently curled home beautifully past the fingertips of Jan Oblak. 1-1.

Neymar’s goal seemed to light a fire under Barcelona, which proceeded to run roughshod over Atlético’s normally-stout midfield and force Simeone’s back four into action. Yannick Ferreira-Carrasco and Jackson Martínez were sent on to wrestle control back from the champions, but it was too late. Messi was already on, and Luis Suárez set him up for the winner in close on 77’. All over. The Atleti hype train derailed (for now).

This time, a poor showing from the midfield proved to be Atlético’s undoing. Koke, in a very un-Koke-like display, looked lost and disconnected from play on the left side. Tiago failed to influence proceedings other than his assist to Torres. On the right, Óliver displayed his individual skill and on-ball acumen, but the 20-year-old was more than a step behind and perhaps his whirlwind 18 months – Villarreal to Porto to Atleti’s new #10 and starting against Barcelona – are beginning to catch up with him. All credit to Gabi, who played quite well and looks refreshed this year, but days when he is the best midfielder are likely days that will see the rojiblancos drop points.

Gabi (left) and Andrés Iniesta (right) were two of the most active players on the pitch Saturday.

Barcelona on the other hand passed its first major test of 2015-16, coming back from a deficit for the first time in four months. A difficult opening trio of games – at Athletic, home to Málaga, away to Atlético – all ended with victories. The bodies may be dropping (Thomas Vermaelen the latest to do so, a calf injury sidelining him for three weeks), but you wouldn’t know it. Even at this early stage, Barça are threatening to turn La Liga into a race for second place. It would be foolish to presume the blaugrana won’t get even stronger once healthy and reinforced. 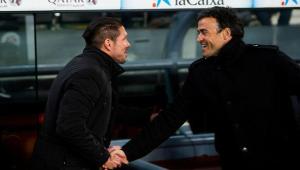 So now, a new story must be written. Luis Enrique once again outfoxed Diego Simeone and kept his troops a cut above the 2014 champions, just as Simeone outwitted Unai Emery yet again two weeks ago to prove Sevilla are not quite top-three caliber. The challengers continue to mount – deep, balanced Atlético, Real Madrid and its 11 goals in 180 minutes, Valencia’s Mendes-fueled youth movement – but Barcelona withstand them all through the greatest player to ever live and a pretty decent supporting cast. Opportunities like the one Atleti missed Saturday only strengthen the Catalans’ case to defend the crown.

It goes to show that the more we think we know about the story, the more we realize we have lost the plot.