Posted on August 10, 2015 by lastsecondpoints

The summer is an interesting time for the Eredivisie and it’s fans. While bigger leagues find summer a time of excitement and new beginnings, in Holland it often comes as the bittersweet end to something bigger.

Memphis Depay, Georginho Wijnaldum, Jordy Clasie, Ricardo Kishna, Niklas Moisander and a few others made their moves from the division to greener pastures. As a feeder league, it’s almost a graduation ceremony of sorts. While it’s sad to see, it’s exciting to see someone like Christian Eriksen developing into one of the better attacking midfielders in the world. Similarly players like Davy Propper, Nemanja Gudelj, Marko Vejinovic and others take a step up themselves, securing spots in one of Holland’s big three clubs with the potential to maybe one day take the next step to a “bigger” league themselves.

Holland has quickly become one of football’s strongest talent growing factories yet again. There was a period of time when the talent was siphoned out of the league and the remaining players were uninspiring, but that’s all changed. When Depay leaves, word spreads of Steven Bergwijn being ushered in as the next big Dutch winger. The Eredivisie is becoming a continuous production line of some of the best young players in football, and the speed they’re producing this talent is prolific.

A player who could have made a sneaky move away from the league was Ajax’s Anwar El Ghazi. Ricardo Kishna was the bigger prospect out of the academy, grabbing more headlines with his fancy skills and well timed strong showing in the Champions League last season, but there’s more refined qualities to El Ghazi’s game. Both 20-year-olds come from the same academy, so it’s hard not to compare their development against each other, but that’s the real dividing line. Kishna still may be the bigger talent of the two, but there’s no denying El Ghazi is the much more big league ready player right now. In a cruel twist of fate, however, the cards fell to where he’s still at Ajax while Kishna will be in Serie A with Lazio.

The first word that comes to mind when describing El Ghazi’s game is versatility. He’s quite tall for a wide man at 6’2″, and while he’s never going to be confused for a target man he does have the ability to make a good run and be at the end of a headed goal. The run he made on Sunday against AZ shows just that: he timed the ball thrown in by Gudelj on the set piece very well and got his head on it. It wasn’t the strongest of headed shots, but it’s nice to have a winger who has a goal of that nature in his wheelhouse when matches get dire. 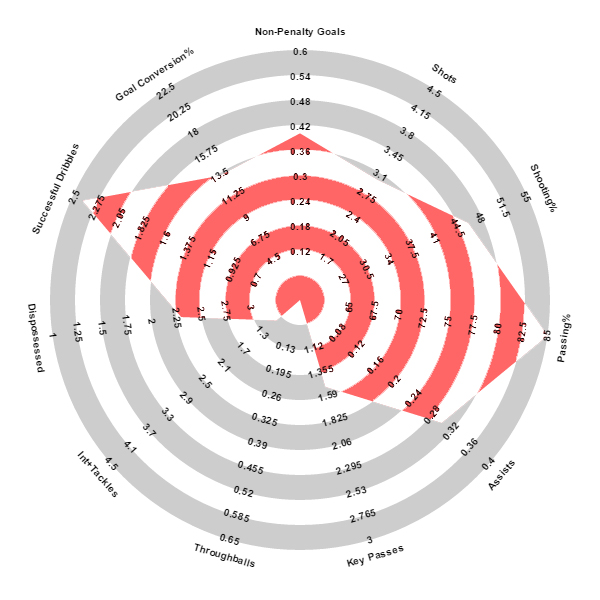 Thanks to @mixedknuts for making the radars public

He also makes strong runs in behind the defense for through balls. Ajax played a 4-3-3 that looked a lot like a 4-4-2 diamond at times that saw Klaassen sliding inside and El Ghazi getting in behind like a striker. His runs from the wing to behind the right center back are noteworthy, especially since he has proper modern winger pace. His straight line speed isn’t mouthwatering like Gareth Bale’s or Arjen Robben’s, but his change of pace is already world class.

He can push the ball past a defender and slink around them with grace. When contact is forced, his large frame is actually quite strong in the push and pull. His ground crosses are noteworthy as well. In the radar you can see that while he’s not a voluminous chance creator at this stage of his career, he gets a high number of assists off the chances he does create. He whips in quick, accurate low crosses, but just needs to make that decision to throw in that pass more often. As he ages, Anwar might look to play more final passes and we could see him with a bevy of assists.

His best skill sets are his scoring and dribbling, though. He finishes those great runs quite often, as his .4 NPG’s per ninety ranks well among wingers. El Ghazi  can also on occasion fire rockets from outside of the box like he did yesterday. No keeper is stopping that dipping and sliding effort that perfectly found the top of the corner. He’s had a few of his goals come from strikes similar to this from just outside the box, or just inside. He strikes the ball incredibly well, and can hit it with both feet.

Like a lot of young wingers, he’s quite skillful on the dribble. He’s been able to beat two or three defenders on quite a few occasions. His stepover is lightning fast and he’s creative at times with how he beats defenders. What makes me believe that he could take the next step is the fact that he can do dribble past defenders at an extremely high level. If he can look for the lane for a final ball more often, he’ll be a winger that seems scientifically engineered out of the lab.

At just 20 years old he looks ready to take the league by storm. Last season was Anwar’s first with the first team and he’s only just made his 32nd league appearance with yesterday’s match. He’s poised to become one of the league’s best players this season evolving even further from a solid first campaign. Look for him to improve on his versatility a lot.

There’s just simply nothing on a football pitch Anwar seems to be incapable of. Just when it feels like he’s pegged down to a certain skillset it feels like he’s evolved into something stronger. That only hangup is the lack of looking for more final crosses, but as his role and ability increases he could find that sweet spot.

If he does, then look out, world. You’re getting the complete package in a winger with speed, strength, height, skill, and an ability to read the game very well. Even if he doesn’t, he still can be a goal scoring, defender beating monster.

One who’s ready to show the world he’s the next big thing in the Eredivisie.

This entry was posted in Eredivisie, Features. Bookmark the permalink.