NO DANNY, NO PARTY

First things first: HE WASN’T THERE. Not like that means a lot anyways, because he’s gone by the end of the first half. BUT STILL, YOU’RE THE MASCOT OF THIS SERIES! NOOOOOOOOOOOOOOOOO.

When Clint Dempsey’s name was announced by the PA guy, the cheers-to-boos ratio was about 50-50. It should have stayed a little more silent, but booing an immortal American international is…nah, just, nah. I get that it’s MLS and not the World Cup, but this guy is massively important to all American soccer fans.

He had set up Obafemi Martins (more on him in a little bit) with an enthralling back heel nutmeg through two defender’s legs while Martins was making a run. Marco Pappa, though, made me fall into the back of my seat, as if my uncle farted in my face while I slept peacefully.

Dempsey’s goal was a mixture of luck and epic placement. He nutmegged a defender on the border of the box, and Josh Saunders couldn’t manage to get his fingertips on the ball at full low dive stretch. Saunders ended up having a hissy fit at his back line and for good reason. Unfortunately for Saunders, (who, in my eyes, has been the best player this season), he just couldn’t find his A game. The defense was  also eviscerated by Dempsey and Pappa, two special players that have tons of creativity on and off the ball.

Two Nigerian guys wearing Nigeria national team track jackets (these track jackets are everywhere) were sitting behind my friend and I talking about how Chelsea is the greatest club in the world (with the heavy accents, it sounded even funnier), John Terry being the best center half in Europe (yeah, that’s no typo) and so many other Chelsea-oriented things that my head couldn’t handle. 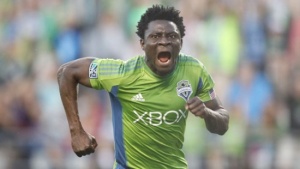 Right after all of the annoying Chelsea talk, they were talking about how Obafemi Martins is the best player in MLS by a wide stretch. “HE’S NIGERIA’S FINEST,” one of them shouted out. And I thought to myself “doesn’t he mean Vincent Eneyama? Peter Odemwingie? VICTOR MOSES?!? NIGERIA’S FINEST?!?”

But really, Obafemi Martins is an amazing specimen. It’s like him and Clint Dempsey played the two man game inadvertently against NYCFC’s back four throughout the match. Whether it was Dempsey free roaming out left, or Martins cutting inside to receive a low cross and vice versa, these guys just did it all.

Martins finished very well in a 1v1 against Josh Saunders set up by Pappa. I couldn’t stress enough about his incredible composure in the box. With no defenders behind him, it was like me shooting around with my friends.

Unlucky Number Seven, But Still On Board:

NYCFC has now dropped seven straight matches without a win. In New York sports terms, that means the following:

See, that’s what it looks like through the eyes of other MLS fanbases when they look at NYCFC fans. They’d assume that the stadium would be empty, like Vans Warped Tour at the Nassau Coliseum parking lot the last few years it was there (god, the lineups sucked).

But that’s beyond false. It’s almost been a month since NYCFC has won their first and only match—their home opener against the Revolution— and fans haven’t stopped attending the games. In fact, a couple of games have sold out— the home opener and their 1-0 loss against Sporting KC— and many have eclipsed 20,000. In fact, attendance figures for their loss against the Sounders clocked at 25,384, which, I believe, was a massive sellout.

There were a couple of times where I felt like Yankee Stadium was empty, but that’s because people left early to catch the elusive 4 train (don’t you dare make a joke about people leaving early).

I’ve left early once, and it was at the Sounders game, because there was no way NYCFC was going to pull off a 1999 Manchester United-scoring-two-goals-in-stoppage-time-against-Bayern-in-the-Champions-League-final comeback. And let me tell you, there was a colossal difference between the train station immediately after the game, and during the 88th minute with NYCFC down two goals. This time around, I got home at 11:00. I usually get home at 12:30 A.M. An hour and a half is a big difference, trust me on that.

Of course, watching the games on TV and being at the game is incredibly different. But I 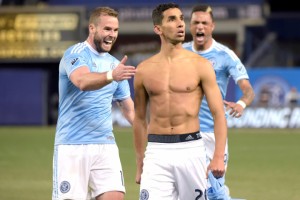 really did feel the roar of 20,000+ when Mehdi Ballouchy equalized in the 54th minute. The generic “N-Y-C, N-Y-C” chant echoed throughout the stadium, but as much as I don’t like it, the interest level hasn’t left the stadium just yet.

There’s always going to be the fickle, anti-pragmatic supporters wherever you go, but this crowd is miles away from fading into obscurity. It’s not just a part of football, but in all sports.

My experiences at the games have been very pleasant (especially when the Eugenie Bouchard stunt double and her friend were right behind me. Oh my goodness, I still miss them). Talking to Danny, his friends, and other friendly strangers that I’ll only see at these games is something I didn’t really expect. Usually, someone is just screwing around on their phone the whole time or something like that.

I’m all for being honest, so here’s an honest opinion on the apparent handing-out of song sheets at NYCFC games: Immediately after looking at the song sheets, I did cringe and gave a “wut” eyebrow like The Rock.

Throughout the past week and a half, there has been a ton of laughter from all over the MLS (and the world, after it was tweeted out) over these song sheets handed out before NYCFC games. I thought I’d offer some thoughts on the sheets.

For the record, I never got one (because I have no idea where they handed them out).

Now, here’s a preemie club. Only nine games have been played. It’s owned by a big Arab conglomerate and the generalization around the league (and world, again) is that the “plastic” Manchester City fans are automatically “plastic” fans of NYCFC. I’ve never heard so much criticism for an expansion franchise in any sport.

What’s more annoying is that NYCFC is a “joke club” for not only handing out the sheets, but also because they play in a baseball stadium. Realize this: D.C United, has played in RFK Stadium, perhaps the biggest dump of a baseball stadium before the Nationals had Nationals Park, since the inception of the club and MLS as a professional sports entity.

What if D.C United, a top three most successful MLS club, played at Nationals Park? My point is this: If you’re going to bash a team that’s starting out and has no idea how to jump start its fanbase, it’s better to brainstorm new ideas rather than just not making any noise in the stadium at all.

Much to D.C United supporters’ delight, the club is set to get their own soccer specific stadium  named — with no originality— D.C United Stadium in 2017, which is going to be located right next to Nationals Park.

So does that mean the same for NYCFC? Besides the complaining about the pitch being

too narrow (by a couple of feet), I don’t know what the big deal is for people that think it’s terrible to play in at Yankee Stadium. Mark Teixeira has already scorned over the fact, but MLS fans? They’re just being lousy. There’s been rumors of NYCFC getting their own soccer specific stadium, but the rumors are no more similar than any transfer rumor a fake Twitter account posts.

It’s easy for me to say, but all you need to do in order to create a song, presumably for a player, is by taking a well-known song and hoping that the amount of syllables in the player’s name matches with the rhythm of the song. Like, for instance, “I Wanna Dance With Somebody” by Whitney Houston can be “I Wanna Dance With Josh Saunders.” There’s one right there. Sure, it’s cheesy, but I’m all for being a complete cheese ball. Manchester United fans paid homage to Queen’s “Radio Ga Ga” by putting Shinji Kagawa’s name in the song. “ALL WE NEED IS…SHIN-JI KA-GA-WA!” C’mon, that’s weird.

In the very first post of this series, I mentioned how the “Eye of the Diskerud” chants were pretty clever, yet weird (but I’m for being a complete cheese ball). There is no such thing as an NYCFC late bloomer, because they just started. The overall team chants are generic, New Yorkish shouts that aren’t really too special. These include, but are not limited to, “N-Y-C *clap, N-Y-C *clap,” “Ole…New York, New York,” you pretty much get the kind of spin the fans are trying to put on the chants.

Again, I don’t think they’re so special, but at least people are getting the feel for chanting for a team they’ve been waiting to cheer for, since NYCFC was first created in May 2013. The song sheets were just a bump in the road. The team will get better as time goes on and the fanbase doesn’t seem to be turning south.

It was a given that NYCFC got their asses handed to them by Seattle. What was more important was that they would go out to Red Bull Arena and grab a win against their quasi rival, the Red Bulls, which, unfortunately, they didn’t, falling 2-1 at the feet of the perennial goal scoring godsend, Bradley Wright-Phillips.

Before I talk about the game, this so-called “rivalry” is exactly what happened with the Brooklyn Nets’ rebranding, where the Knicks automatically became a rival because of their metropolitan location (and who knows when they’ll actually face in the playoffs…). This time, Third Rail supporters sailed across the Hudson River.

The unhealthy gluts of hype that was thrown at this game was, of course, necessary for network promoters, but it turned out to be just like the Manny Pacquiao-Floyd Mayweather fight: very meh.

Some of the banter between the two fanbases wasn’t too bad. NYCFC fans acknowledged that the Red Bulls haven’t won MLS silverware, with the exception of a community shield. Red Bull fans counteracted with calling them “Man City Lite” and smurfs (like Islander fans would call the Rangers). But most of it is stuff you would have expected to have been said: lack of trophies and being a lovechild of a bigger club. Nothing new.

The first New York derby’s scoreline looks convincing at 2-1, but it really wasn’t if

you watched the game. Bradley Wright-Phillips really should have scored a hat trick. Josh Saunders made a nice 1v1 save, but Wright-Phillips had an empty net with someone backing up on Saunders’ right. He demolished NYCFC’s defense, even when the Red Bulls had only 10 men on the field after Matt Miazga was sent off in the 36th minute (for what really wasn’t even considered a yellow card).

NYCFC’s defense played like QPR’s defense against Manchester City earlier that day. It’s like when you activate offside traps in FIFA, only to get sucked up like pet dander into a vacuum. Well, just picture yourself doing that at least 5 times, giving up brutally easy gimmies.

Although Patrick Mullins slotted in the 76th minute, nothing else was salvaged. Bragging rights were won for Red Bull fans and rightfully so. NYCFC fans just have to, unfortunately, pucker up, and admit that the team is the antithesis of playing good football, because that’s been reported missing on the milk carton for way too long.

This entry was posted in Features, MLS and tagged David Villa, mls, nycfc. Bookmark the permalink.