If you have been living under a rock this season, Raheem Sterling and Liverpool have been “discussing” a wage increase for a new contract. I put the word discussing in quotes because it’s more resembled a couple yelling at each other over who was the one who forgot to pick up the kid at school. It’s even gotten to the point where the Daily Mail is reporting that Sterling will reject a new contract with wages up to £180,000 per week.

Now, take that last point with the amount of salt in your standard McDonald’s Big Mac considering it’s the Daily Mail, but the contract squabbles are very real. It’s even gotten to the point where people not associated currently with Liverpool are putting their two cents in. Here’s an example of one, from Harry “Wheeler and Dealer” Redknapp:

“Have another two or three years of playing as you are now, keep taking your game on and you will get the rewards. The money is there anyway, but you will be up there with the top earners in the world in another two or three years if you keep progressing. You are at a fantastic club, one of the best football clubs in the world. You are lucky to be playing at a club like Liverpool. Get your nut down, do your job, and the rewards will keep coming.”

Before going further, let’s all agree collectively that Harry Redknapp complaining about the supposed wage demands from Sterling is the ultimate pot calling the kettle black.

One of the main things you’re hearing from ex players concerning this issue is the fact that Sterling is playing for a treasured club in European football and should be grateful. Sure, that’s correct even though season by season Liverpool are downgrading into a feeder club, or the club who have to overpay considerably for slightly above average talent (more on this in a second). This isn’t the 1980’s or even the mid 2000’s, when the club could hang its hat on being a perennial contender in European competitions.

The other part ex footballers spew on about is having to prove yourself more before being allowed to get your money. Football has evolved so much over the last 20-30 years that the ethos of being the “lunch bucket footballer” who embodies a club isn’t prevalent anymore. Footballers are mercenaries, just like we all are. We try and get as much money as possible in whatever field we do in as quick a fashion as we can. Raheem Sterling isn’t any different, and vilifying him for this is lazy at best and dumb at worst considering we would each do the same thing in Sterling’s shoes.

The sad part about this whole soap opera is that Raheem Sterling is really really good at a very young age. Spending a chunk of money today on a new contract could look like a bargain soon with the new TV deal that’s coming to Premier League teams. Plus, given his young age, you could reasonably expect that he still has an ample amount of growth left in his game, which is mind-boggling, given that he’s already doing this: 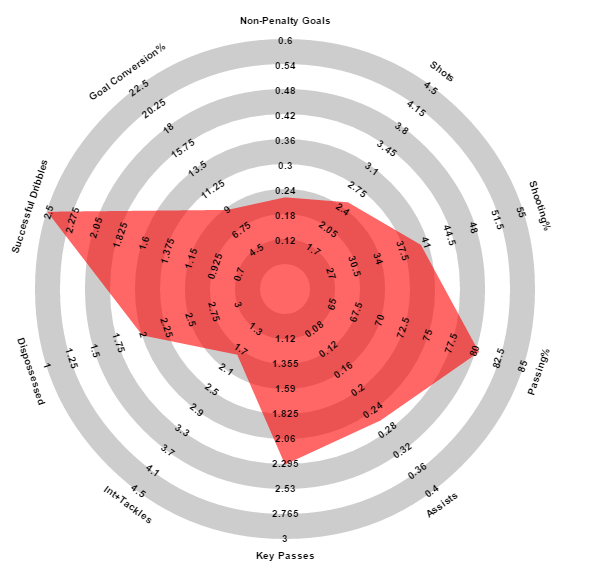 Thanks to @mixedknuts and @SamiHernia for making these radars public

He creates chances, his shooting accuracy for a wide forward is passable and he doesn’t lose the ball all that much despite having the ball in his feet as much as he does. In many ways his game compares to Eden Hazard who loses the ball more, but is much more ruthless in goal. 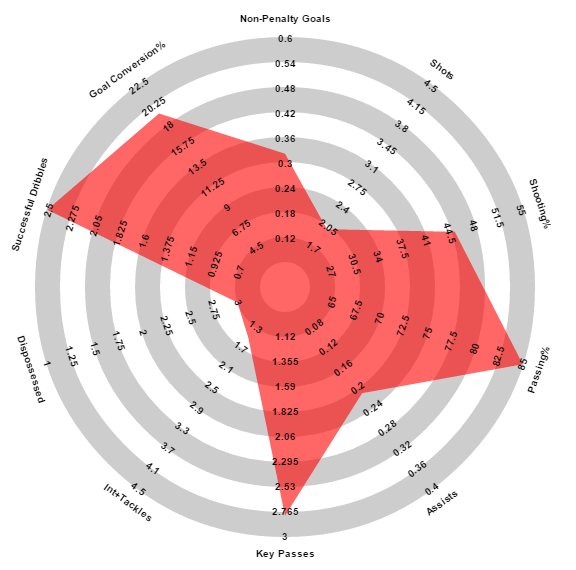 He’s the most talented player Liverpool has produced since the days of Michael Owen, Robbie Fowler and maybe Steven Gerrard. He’s also the best English prospect currently –  with respect to Harry Kane – yet even the way he’s treated within his own club is mercurial. On one hand, Brendan Rodgers gave him a break during the hectic holiday schedule, which while prudent considering the amount of football Sterling has played in the last two years does also have the whiff of Rodgers putting his money on Sterling.

On the other hand, he’s played him out wide on the right as a wingback in numerous games (including the most recent one against Manchester United) this season despite his natural talents being as a free roaming attacking midfielder. It could come across as Rodgers putting his stamp of authority and playing him in that position is some form of punishment. He was very much a bystander versus United and only started to come into the match after Liverpool went down to 10 men.

We’re over 750 words into this and we haven’t even directly answered the core question surrounding the issue: Is Raheem Sterling worth the money? Yes. Yes he is. Namely because:

1) As mentioned before, the upcoming EPL TV deal will give English teams even more money to spend on player wages, which could help in re-signing players to new contracts and being able to retain talent from bigger clubs while not killing your financial model at the same time.

2) The TV deal will also help in player recruitment. In a way, it’s almost akin to what’s happening in the NBA with how their salary cap is going to explode, which means signing expensive contracts will now be much more easier to stomach with the added cash flow.

3) Considering how much they’re already paying in player wages for mostly remedial talent, it’s odd that they’re putting their foot down when it comes to their best player.

4) Liverpool just frankly need to keep him at all costs.

The last one is a biggie. Even with all the new TV money, Liverpool still can’t compete with the wages teams like Manchester City (even under FFP) and United can offer players, and their aura of being a club whose European nights are the stuff of legends has all but faded away. It’s been five years since Liverpool were in a meaningful European match and six years since their last knockout stage match in the Champions League, a quarterfinal loss to Chelsea.

They were embarrassing in the Champions League despite spending much of the money from the Luis Suarez transfer on squad depth and getting a cupcake draw. They were not much better in the Europa League. They’ve become caricatures of what their ethos embodies. Hell, even Rodgers himself tried to spin the defeat against Beşiktaş by claiming that the FA Cup and Premier League were the main goals this season. Combine this with their erratic form domestically in the same six year span and it’s even more maddening.

Losing Raheem Sterling this early in his career would all but confirm their status as a glorified feeder club, especially if he left to go play for a club in the EPL in a possible Fernando Torres 2.0 transfer saga. It wouldn’t be shocking if, even given the money he’s asking, Sterling left in the summer because of what the club has come to be post Rafa Benitez.

Regardless, Liverpool must do everything in their power to keep their most prized possession. Otherwise it will be two straight summers that Liverpool will lose their two best players. Last summer, Liverpool struck out with numerous transfer targets, including Alexis Sanchez and Xherdan Shaqiri, and it could be even worse for their transfer policies this summer if they lose another top player (which is an achievement considering how fucked up it seems to be already).

At just 20 years old, Raheem Sterling is the future of English football and is perhaps the best under-21 prospect in the world. It may seem like an eternity to some but as recently as 2011-12, Liverpool were a floundering club with no distinct future. It took a lot of luck and ingenuity to get Liverpool out of that, but selling Sterling this early in his career could be one bridge too many.

Marseille supporter, #FancyStats supporter. Troller of all things Twitter. I write words and hope they make me sound SMRT
View all posts by Moesquare →
This entry was posted in English Premier League, Features. Bookmark the permalink.