Posted on February 18, 2015 by Doctor Impossible

PSG and Chelsea battled to a 1-1 draw at the Parc des Princes, with PSG probably ruing the fact that they couldn’t get more out of this game.

Because of PSG’s injury problems (Serge Aurier, Yohan Cabaye, Lucas Moura and Marquinhos all sustained injuries against Caen, although Marquinhos was able to play), not many gave the Parisians a chance against Jose Mourinho’s squad. However, for all the injury woes the Fighting Zlatans had, their starting XI (shout out to Zac Cleary) wasn’t that bad, Ezequiel Lavezzi excluded (more on him later).

PSG lined up with Salvatore Sirigu, Gregory Van Der Weil, the aforementioned Marquinhos, captain Thiago Silva and Maxwell in defense, with usual center back David Luiz higher up the field as a defensive midfielder. Joining Sideshow Bob in the middle were Marco Verratti and, in my opinion the man of the match for PSG, Blaise Matuidi, with Edinson Cavani, Lavezzi and Zlatan up front.

Mourinho welcomed back Diego Costa for this tie, and the Brazilian Spaniard was joined by Thibaut Courtois, Branislav Ivanovic, Gary Cahill, John Terry, and Cesar Azpelicueta in defense. The Chelsea midfield was composed of Nemanja Matic, Ramires, and Cesc Fabregas with Willian and Eden Hazard on the flanks.

From the beginning, it looked as though Chelsea were looking to play for a draw, as they didn’t look to attack PSG, inviting the Paris team to attack so they can counter. PSG was more than fine with this, and only Courtois’ brilliance in goal denied both Matuidi and Zlatan chances to put their team ahead.

PSG attacked Chelsea to no avail in the first half, and indeed it was Chelsea who went ahead in the 36th minute, with three of their four defenders combining to score a wonderful goal (off of their only shot on target) from frequent important goal scorer Ivanovic.

Game (and tie) over, right? Not quite.

PSG came out stronger in the second half and asserted their dominance, particularly in the midfield. The midfield three were compact all game, and while many will point to Verratti’s constant fouling and nullifying of Chelsea’s Cesc Fabregas, it was Matuidi who was causing the most trouble for the London club. 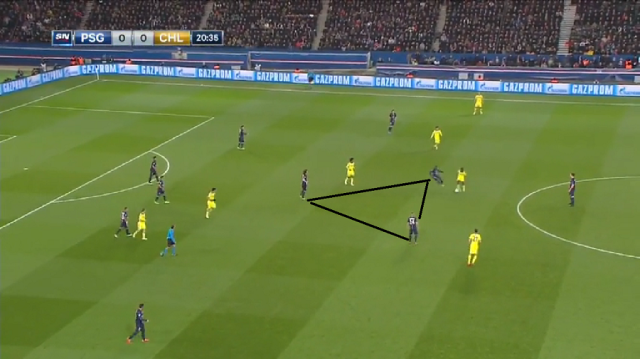 Just Blaise was everywhere, completely stretching the Chelsea midfield and troubling Matic on more than one occasion. Since Mauricio Pochettino exposed the Chelsea defenders’ lack of pace in the New Year’s Day drubbing at White Hart Lane, teams have tried to attack Chelsea by either stretching the midfield – taking advantage of Fabregas’ seeming allergy to track back and play any defense, with him trying to mark Verratti being downright comical – or bypassing it altogether and attacking the flanks. PSG elected to do a combination of the two, and it was Blaise who was the catalyst for this approach.

He attacked Chelsea through the middle in the first half, but in the second half, he was drifting to the left whenever Cavani cut inside. Indeed, PSG equalized when those two combined in that effect, with Matuidi crossing from the left for the Uruguayan to head home a free header. The goal emboldened that approach, and on more than one occasion, PSG (and Cavani in particular) took advantage of the space between the Chelsea full back and center back. But because it was Cavani, his finishing left lots to be desired.

This was the pattern for most of the second half, and when Javier Pastore came on in the 80th minute (which should probably get Blanc fired, to be honest – HOW DO YOU WAIT EIGHTY MINUTES, FAM?), Cavani was pretty much the central striker, taking advantage of the space allowed to him by Zlatan in the box (Zlatan’s presence is a present, kiss my ass).

The Paris club attacked to the final whistle, and overall man of the match Courtois’ brilliance in goal was probably the main catalyst for Mourinho’s squad leaving with a draw.

Once again, Chelsea’s midfield was stretched, with Fabregas pretty much nullified. That was Mourinho’s biggest problem on the night. Thankfully for the manager, the team stretching his midfield was dealing with its own recurring problems of not being able to break down a team.

I have complete faith in Mourinho to at least attempt to correct that problem for the second leg at Stamford Bridge. I don’t have any reason to believe Blanc will even address any of his.

This was PSG’s best chance at stealing the tie, but poor finishing (and a Courtois masterclass) stifled all the good work their midfield was doing, again. “I must say, Chelsea didn’t show much,” Blanc said after the game.

Newsflash, Laurent: they didn’t have to.