Pompey Back To Playing Up

As an avid Football Manager player, I always look at teams that I believe I can turn completely around. Usually, I hover through the lower English leagues, going as far down to the Football Conference and Isthmian League Premier Division.

You may wonder why I have the temptation to torture myself. Well, because playing as one of the brawn top 7 Premier League teams (particularly Manchesters City and United) can get mind-numbing, knowing that you’re probably going to make splashy signings on key players.

Taking over as Manchester United manager, signing Marco Reus and the whole Dortmund squad for bajillions of dollars, or buying every Southampton youth starlet for zillions of dollars and selling them for profit are simple tasks with gargantuan finances. Of course, you’re going to succeed in the long haul.

I have a Portsmouth obsession and I always will, primarily because of the 2007-08 FA Cup winning squad. It had everything: they had the manager in Harry Redknapp, there were talks of him becoming the Three Lions manager (no match for Woy) but nothing came to fruition. One of my biggest goalkeeping influences, David James, anchored the net as well as any other 37 year-old keeper did that season. Glen Johnson had an epic afro, one that could match the height of Benoit Assou-Ekotto’s. Sol Campbell arrived after betraying

I would love to just ramble on about the 07-08 squad, their FA Cup win and UEFA Cup qualifying the year after that — reminiscing is good and all — but what’s in store for Pompey’s future? Can they begin to turn around their abysmal past after this season?

Portsmouth’s financial welters were just beginning with that 2008 squad, and eventually they became the first club to be put under administration in the Premier League’s history. The PL deducted nine points for their macabre finances and they were then relegated to the Championship, along with Hull and Burnley, at the end of the 2009-10 season.

That same year, then club administrator Andrew Andronikou revealed that the club had

overwhelming debts of £119 million, with 14 million of those pounds belonging to the past transfer dealings of Defoe, Johnson and Muntari, along with voluminous agent fees of over £2 million, one of them being £2.3 million for Diarra alone.

Just two seasons ago, Portsmouth started in League One with -10 points. At that point, fans had gone through a few owners and several club investors failing miserably, hoping to make some bucks. Instead, that backfired all the way to the English Channel, with investors and fans losing more money than they had gained.

But that’s when the Fratton Park faithful’s fuse had finally blown.

The Pompey Supporters Trust took over in 2013 after a deal was done for them to buy Fratton Park for just over £3 million, making Portsmouth the biggest fan owned club in 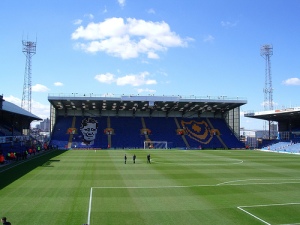 England. Some English tabloids reported the deal was way more than £3 million, at amounts of £10 million–which isn’t surprising, considering that a paper like The Sun would report such falsities (they still don’t remember the 96).

In layman’s terms, that’s less money spent on a football ground than Glen Johnson’s total transfer fee when he was bought by Harry Redknapp. Yowza.

Portsmouth is the most notable English club to be taken over by their supporters. According to the International Business Times, PST is made up of 2,368 shareholders, who own 51% of the club, raising around £2.5 million for the club. Pompey may be the biggest fan-owned club in England, but throughout the past few years, a number of fellow League Two competitors have had spitting images of their financial struggles.

Wycombe Wanderers, for example, were acquired by their supporters trust through previous owner Steve Hayes in 2012. The trust has had complete autonomy on the team as a whole, as well as their training ground, since then. Wycombe placed 15th in their first season under the trust, and narrowly escaped relegation last season. Now, they’re sitting atop League Two on 51 points, with a 14-9-3 record.

And even though Luton Town (David James’ childhood club) isn’t owned by a supporter’s trust, they’re climbing their way back to relevance after horrific financial sanctions docked them several points right around the time Portsmouth’s steep decline started. The Hatters crushed Conference Premier competition, winning automatic promotion as undisputed winners, and now they’re at the top of the League Two playoff spots in fourth place.

But Portsmouth? They currently lie in the bowels of League Two, in 18th place with 30 points. Despite Pompey’s current standing, the best news came at the beginning of this season. In late September, PST posted a statement on the Portsmouth FC website, stating that they had cleared up all of Pompey’s £100+ million debt. The upside is on a mini-resurgence and now that they finally have money to spend again, and manager and club favorite Andy Awford can now make moves for his club that fans have been wanting to make forever.

Perhaps the best young guns with maximum potential on the team right now are Jack Wilshere doppelganger Jack Whatmough (according to the Daily Mail, at least) and, quite possibly their best player at the moment, Jed Wallace.

An 18 year-old center-half (it’s absolutely wild that he’s two days older than me), Whatmough started out at Southampton’s famed youth squad at the tender age of 11. He 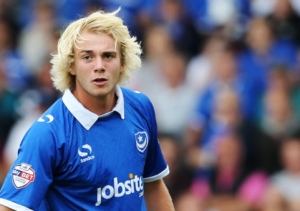 joined Portsmouth’s academy in 2009 and has stayed with them since. Without a doubt, Whatmough’s best ability is refusing to ball-watch, which is probably the most frequent dilemma with any defender. Instead, he focuses on picking out the distributor’s direct opportunities that can break a defense.

In fast-paced League Two, where tactics are primarily based on going route one through constant direct passing, it’s absolutely imperative not to ball watch, because if one pass goes through, that pass can prove to be a huge hassle for the defense. The floodgates open immediately, counter-attacks (like this one Portsmouth started against Morecambe last season) ensue and all hell breaks loose for the back line.

Twenty year-old Wallace (pictured at the beginning of this post) is a classic, fleet-footed attacking midfielder, who causes the majority of headaches to opposing defenses for Pompey, as showcased in this sweet run of a goal. Pompey sent him out on loan to Isthmian League team Whitehawk at the beginning of the 2012-13 season, and he scored a fantastic 8 goals in 11 games while there. For comparison’s sake, Wallace is like a box-to-box midfielder crossed over with a striker’s mentality.

I applaud every single Portsmouth fan that stuck with the team as it dug out of its colossal financial hole. It looks easy when people play Football Manager — time-consuming, but worth it in the end. But this is real life. The club overcame near-death insolvency (literally), went through corrupt owners,  bank loans, agent and transfer fees–everything you could think of. And while they are still struggling, there’s a small crack of light at the end of a very dark tunnel.

And I thought being a fan of the Mets, Jets and Knicks was bad.