The Manager Who Asked Por Que

Posted on January 31, 2015 by Doctor Impossible

Jose Mourinho has a problem.

Coming into this weekend’s showdown with second place Manchester City, he finds himself without Diego Costa, the Premier League’s leading scorer who was banned three games by the Football Association for his various transgressions in the Capital One Cup game against Liverpool. Jose Mourinho may also find himself without the Premier League’s assist leader, midfielder Cesc Fabregas, who in the same COC fixture went off injured.

For any manager, those two problems would cause disaster. But for a manager like Jose Mourinho, who is undoubtedly a brilliant manager and a master tactician, these two problems are easily solved (just park the bus).

No the Mourinho problem I’m referring to is one that he cannot solve, a problem he doesn’t even want to solve. Mourinho’s problem is his reluctance to enter any competition as a favorite.

Just like Michael Jordan, Mourinho has to go into a season – heck, into a game – with an excuse to feel slighted, to show that while he is as good as he proclaims himself to be (and in fairness to him, he is), his team and / or circumstances surrounding his team aren’t all peaches and cream. It’s akin to having your cake and eating it too.

Whether it was a shortage of strikers and stating that Chelsea was a little horse last year (which I will point out was not only exaggerated, but was of his own doing as well), to an all out war with an English media (who have all chosen Chelsea as not only the best team in the league, but as one of the best in Europe as well) this year, Jose is trying to foster an “us against the world” mentality, which would be commendable if he didn’t do this every single year. 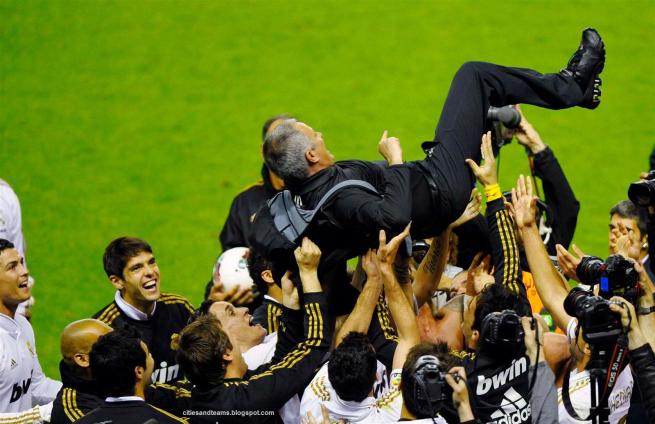 He did this at Chelsea during his first stint, which made sense since that Chelsea team hadn’t won at all in the Premier League era until he got there. He did this at Inter, during the period when Serie A was marred with the Calciopolli scandal, and it sort of made sense because Inter always saw themselves as the little brother to Juventus and AC Milan. And while it never made sense in Madrid, he pulled the same stunt in the Spanish capital.

It was then that it started to backfire.

Jose Mourinho’s shine took a beating in Madrid. He started off brilliantly, winning the Copa del Rey in his first season at the capital and then sort of breaking up the Barcelona stranglehold on the league title, winning it in 2012. His second season was by far his most successful in the Spanish capital, but all the goodwill fostered during that season would erode in year three.

In Mourinho’s third year at Madrid, he lost the league to Barcelona by 15 points, which is the highest points deficit Real Madrid have suffered in their history. He also lost the Madrid derby, something that has never happened for 14 years and 25 matches (but now happens regularly).

Mourinho’s love for the dramatic – whether real or otherwise – has began to rear its head again in west London. He’s now fighting the good fight against Jamie Redknapp – which, why? – And will no doubt shift his focus to the FA if Manchester City were to get a win this weekend.

In his weekly column for The Independent, Paul Scholes pointed out that Mourinho was too busy chatting up fourth referee Phil Dowd that he missed the goal defender Branislav Ivanovic scored. In his view, that type of thing will no doubt wear thin sooner rather than later.

“The funny thing is, the more Mourinho does it, the more referees will be inclined to ignore him. If you spend an entire game jabbering away at an official you will very soon acquire a reputation as an annoyance best ignored. The whole process is counter-productive,” he wrote.

The same thing could be argued about Mourinho’s approach. After a game against West Ham last season, when Sam Allardyce bested Mourinho by playing, in Mourinho’s words, “19th century football”, a journalist asked Allardyce about Mourinho’s post game comments.

Big Sam’s brilliant response? “He can’t take it, can he?” he said. “He can’t take it because we’ve out-tactic-ed him, out-witted him. He just can’t cope. He can tell me all he wants. I don’t give a shite, to be honest. I love to see Chelsea players moaning at the referee, trying to intimidate the officials, and José jumping up and down in his technical area. It’s great to see.”

One day (and for entertainment purposes I hope it doesn’t come soon), Jose Mourinho will find himself ignored, his schtick laughed at, just like the boy who cried wolf. Mourinho will go from el puto amo, the fucking chief of the press room as Pep Guardiola once called him, to a measly court jester.

And at that point, Jose Mourinho will only have to look at himself as the reason por que.