Zlatan, Zlatan: Where Art Thou Zlatan

Note: The radars used in this piece were created by Ted Knuston and Sami Hernia

We make no bones about the following: We at the blog love Zlatan Ibrahimovic. We love his eccentricity, we love that he goes into third person when it comes to the notion of tryouts. We love that there’s a #DaretoZlatan campaign and he’s doubled as an inspiration when it comes to DM sliding for novices everywhere. We also love the fact that he’s been one of the best strikers in Europe for quite some time and submitted a great overall season last year at the ripe old age of 32. There’s a reason why our website is named after the man. As honorary member of the blog Jon once said, “if you’re living right, every day is Zlatan day.”

It can’t be understated just how great of a season Zlatan had last year. 32 year old strikers shouldn’t have this much of an output in domestic league play, much less in a league as stifling as Ligue 1: 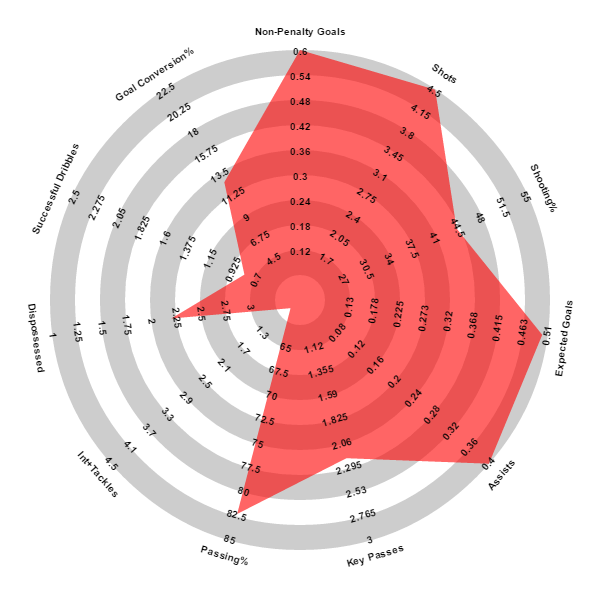 There’s been numerous age curves done in the past few years on players, and the overall consensus of them are players lose more and more of their impact once they’re past their mid 20’s. Again, 32 year old strikers shouldn’t be producing that much to the point where nearly half the radar is completely covered. That type of production is only reserved for the likes of Messi and Ronaldo, who are considerably younger.

But Zlatan isn’t your ordinary 32 year old, which is why we love him and makes the following very to say: Zlatan hasn’t been his usual Zlatan self this season. This isn’t the first piece you’ll read on this; French football journalist Julien Laurens wrote about Zlatan’s mood problems less than a week ago that’s stemmed from his overall decline this season:

The heart of the problem is the heel injury that kept him out from September to November. It was a massive blow for him. The pain has gone, but the fitness has too. For a big guy like Ibrahimovic, whose body is used to playing every three days, such a long break is hard to come back from.

He is less mobile this season, and he spends much more time in the box than he did last year when he frequently dropped deep to get involved in buildup play — as evidenced by his solitary assist. His nerves appear for all to behold, in episodes like his rollicking of Pastore or his pair of yellow cards for dissent in his past four games.

Lower body injuries for a guy with Zlatan’s physique are brutal, especially something as finicky as the heel/Achilles. It also doesn’t help that Zlatan has had an insane workload the last 4-5 season which has compounded such things.  Since 2009-10, Zlatan hasn’t played a season where his minutes total in all competitions didn’t exceed 3000 minutes. He even had two seasons back to back in 2011-12 and 2012-13 where Zlatan played over 3500 minutes in both years, topping out at 3789 minutes two seasons ago.

It’s astonishing numbers for any striker, especially one who’s in his thirties. It’s no surprise really that Zlatan’s overall production has declined this season as a result.

His playmaking data is virtually nonexistent compared to last season when he nearly reached the limit in passing%, key passes per 90 and assists per 90. Zlatan’s still been very prolific as a goal scorer when healthy albeit his goal scoring rate has declined, and just like his playmaking he hasn’t created the same quality of chances as he has previously

Again, Zlatan when healthy has been very good this season and his NPG and Pseudo ExPG data rate among the best in Ligue 1, but it isn’t the orgasmic type of production we’ve been accustomed to seeing from him.

Which gets to the nuts and bolts of the issue PSG is facing. PSG are more or less based around Zlatan Ibrahimovic. Check that, PSG are based entirely around Zlatan Ibrahimovic. That’s not been a bad thing overall in previous seasons. PSG were really close to making the Champions League semi-finals last season and Zlatan played a really big part of it. They also took care of business in Ligue 1 last season rather easily, especially considering how much of a dog fight they’re in this season to repeat for the third time. PSG in the last two seasons have had really good underlying numbers and their team pseudo ExPG data have been by far the best in the league. It’s no coincidence that with Zlatan’s drop in form, the club hasn’t looked at all like the one that’s been heads and shoulders above every other Ligue 1 team last season.

Having a club based around a striker who’s on a noticeable decline like Zlatan appears to be is a bad thing. When the Swedish striker was out with his heel injury earlier this season, PSG played a bit better under his absence including possibly their best win of the season against Barcelona in the CL late September. Without the sphere of Zlatan’s influence, it gave more attention to the likes of Edinson Cavani, Lucas Moura, Javier Pastore and even PSG youth academy player Jean-Christophe Bahebeck

But even saying that doesn’t make it as clear cut as “well Zlatan was out and they went undefeated so maybe Zlatan is the problem”. Despite the hard work Cavani put in and his clamouring previously of wanting to be played more centrally, he didn’t produce nearly as much as he should’ve in the situation he was given. In the six league games that Edinson Cavani started, El matador only scored 2 non penalty goals while registering a pseudo ExPG number of 2.88. And Cavani on the whole this season has been just that, underwhelming.

The more interesting conversation however is with Javier Pastore. When Zlatan is healthy and at his best, he’s everywhere, which on the whole is the best for PSG but it does come with caveats. Zlatan is one of the few players in world football where you conceivable do build the team around his exploits and it can marginalize players. Despite Cavani’s disappointment during Zlatan’s absence, it doesn’t change the fact that he’s had to alter his game and be a secondary player to work with him.

Pastore is another example. Pastore’s career with PSG for the longest time was stalling out with Zlatan aboard. Pastore’s at his best when he’s able to some of the things that Zlatan does, which is probe and play as an almost positionless midfielder and dictate the action. When Zlatan’s injury occurred, Pastore was the biggest beneficiary of it. It was a far cry from the midfielder that was relegated mostly to being a left sided central midfielder. Again PSG weren’t flawless with the much more influential Pastore, but it was some of his best football in numerous years.

But this team ultimately goes as Zlatan goes, whether it’s to the detriment of guys like Cavani or Pastore or not. And Pastore has been very good in spots with Zlatan, with his performances versus Metz and Evian as good examples. It was really fun to see Pastore play as a roamer while Zlatan was gone, but it ultimately was more or less a fleeting reminder of how fun a player Pastore was with Palermo and in his first season with PSG. PSG need Zlatan to be ZLATAN to win the Ligue 1 crown and do well in the Champions League, but maybe the question we should be ultimately asking is whether or not Zlatan can return to being that all encompassing force one more time.

Marseille supporter, #FancyStats supporter. Troller of all things Twitter. I write words and hope they make me sound SMRT
View all posts by Moesquare →
This entry was posted in Analytics, Ligue 1. Bookmark the permalink.

3 Responses to Zlatan, Zlatan: Where Art Thou Zlatan