“Don’t throw shit at us from outside because that will only do us harm.” Damn, Lio. Calm down.

The funniest thing happened to me last week. You know what I saw on the Twitter machine? The app that never sleeps? The app that coughs hot takes like smokestacks in smog-choked Manchester (Lionel Messi’s future home, if you read the news)?

Barcelona are in crisis.

I saw it. You saw it. We all saw it. After a 1-0 loss away to Real Sociedad last weekend, the papers–CATALAN papers among ’em, mind you–reported with increasing frequency, ferocity and perceived veracity that Luis Enrique had “lost” the dressing room at Camp Nou and would be sacked within a fortnight. No, strike that, within a week. NO, WAIT, WITHIN A DAY. After sporting director Andoni Zubizarreta lost his job in the wake of Moyes’ masterpiece, the next order of business for second-placed Barcelona was to make a change in the dugout. Who would be fed to the jackals next? Óscar García? Ronald Koeman? Frank Rijkaard? There must be a replacement lined up, for Barcelona are in crisis.

Oh, sure, they beat 19th-placed Elche 5-0 midweek, and sealed their Copa del Rey quarterfinal spot in the process. But that was ELCHE. They suck. The papers did not relent. “Messi to Chelsea or Manchester City

for 500 million quid.” “Arsenal among English teams monitoring Luis Suárez.” “Sergio Busquets linked with move abroad.” As if that wasn’t enough, guess who was waiting for this beleaguered bunch on Sunday? Big, bad Atlético Madrid, the reigning champions, who the blaugranas failed to beat in six tries over three separate competitions last season. “Oh, boy,” the smug supporter with the Cruyff avatar said. “Barcelona are in crisis.”

More than 80,000 spectators turned up to eulogize the 2014-15 edition of FC Barcelona on Sunday night. Luis Enrique, credited with turning the once-legendary Barça midfield to porridge thanks to his undeniably brain-dead tactics, was granted one final go-around before Josep Bartomeu put him out of his misery first thing Monday morning. Neymar, visibly distraught after he was substituted in the 5-0 midweek, was surely thrilled. As was Messi, of course. Sport, noted Barça experts/shills, claimed that HE was the one who demanded Lucho get the sack. The Atleti fixture would serve as the season finale of Real Housewives of Catalonia, and things could only get better from that point. After all, Barcelona are in crisis.

You tired of hearing it yet?

You know it’s not true?

You know it’s all fiction? A grand lie?

Barcelona are not in crisis. Never were. And Messi made damn sure you knew it.

Turns out Barcelona would beat Atleti on Sunday night. Convincingly, I might add, by a 3-1 scoreline. The South American trident (MSN, they now call it) bossed Diego Simeone’s smothering defense; all three members scored. Neymar was first on 12 minutes, and after he had a Curt Schilling moment (sock, bloody) thanks to a clattering tackle from José Maria Giménez, 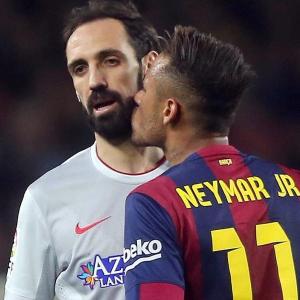 he proceeded to put on a clinic on the left of the 4-3-3. Juanfran, sitting on a yellow, could offer little resistance.

Suárez scored his second La Liga goal on 35 minutes, and that tally eventually would stand as the match-winner. He didn’t have a *great* match overall (he missed a sitter prior to his goal), but he’s clearly becoming acclimated to the Spanish game.

And Messi? The man smack-dab in the middle of all this supposed internal strife? He flogged converted left-back Jesús Gámez for more than 80 minutes before Cholo mercifully removed him. Messi then proceeded to score on 87′, his 21st goal all-time against Atleti, to seal the game.

Barcelona played quite well. They certainly could have added on another goal or two. The front three looked like a flying death machine in captain Xavi’s absence, and Gerard Piqué’s return to form, brief though it may be, was a shot in the arm to a back-line that sorely needed it.

Atleti played quite poorly. Disorganized, panicky, and lacking any sense of sustainable rhythm, the champions changed their defensive shape numerous times in the first half and tried to kick-start the attack with the introductions of Fernando Torres and Raúl García, respectively, in the second. But they never truly threatened to level the score after Mario Mandžukić smashed home a penalty before the hour.

And after the match ended, after all the supporters arrived home to revel in the rebirth of their club’s season, Lionel Messi finally spoke up. No louder than a whisper, but still more thunderous than a sold-out Camp Nou bursting at the seams, he delivered this message; simple, yet packed with the power of a thousand lefts, to the sensationalists at Mundo Deportivo and Sport and all who dared to lend an ear: