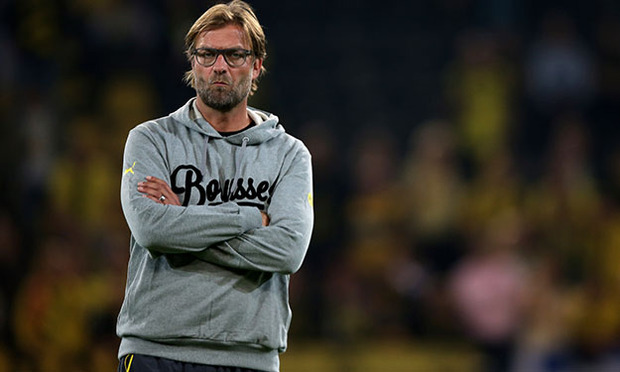 Like everyone else, the German league is on a fortnight’s recess for international qualifiers. Which is unfortunate, but them’s the breaks. Let’s round up the league’s recently-completed seventh round.

-Jurgen Klopp said Saturday that his side hit rock bottom, and I’m inclined to agree with him after Hamburg shocked Dortmund 1-0 at Signal Iduna Park. Wracked by injury and inefficiency (three shots on target out of 17 fired at Hamburg keeper Jaroslav Drobny’s goal), Klopp’s battered lads sit 13th in the table at the much-needed international break. Hamburg won with only 36% possession and can largely thank its dominant center-back pairing of Johan Djourou and Heiko Westermann (31 clearances and 14 aerial duels won between them) for the three points.

-The champions were back at it Saturday too, and they produced a vintage display in a 4-0 whitewash of Hannover. Pep Guardiola stuck Robert Lewandowski, Arjen Robben, and Xherdan Shaqiri up front (because fuck you, that’s why), and it pretty much worked out; the first two accounted for all four goals (a brace apiece), while the latter tallied an assist. Robben also completed eight take-ons. Oh, and Mario Götze and Thomas Müller didn’t even play. Bayern ran their record to 5-2-0 and coasted four points clear of Hoffenheim at the top.

-Speaking of Hoffenheim, the Rhein-Neckar club kept pace with the leaders and saw off ten-man Schalke, 2-1. The hosts were up two within 30 minutes after goals from Tarik Elyounoussi and Adám Szalai, and didn’t concede again after Klaas-Jan Huntelaar’s goal seven minutes from time. Schalke now sit a disappointing 11th in the table, with just eight points from seven games, while Hoffenheim, without European commitments, have to love life in second, with three wins and four draws to this point. Man of the match: none other than Roberto Firmino, who set up both goals, created five chances, took five shots, and put two on target. (UPDATE: Schalke sacked manager Jens Keller on Tuesday morning.)

-Remember Paderborn? Early-season darlings? A 4-0 rout in Munich put an end to that stay atop the table, but the Bundesliga new boys still provide plenty of fun, as evidenced by Saturday’s 2-2 draw away at Leverkusen. Süleyman Koç (who is quite the interesting story) opened the scoring 20 minutes in, but Lars Bender equalized for Bayer three minutes before half. In the 72nd minute, Paderborn midfielder Marvin Bakalorz saw red for a tackle from behind (and subsequently received a two-game suspension from the DFB), yet that did not deter the visitors. Three minutes from time, Moritz Stoppelkamp scored to put Paderborn in position for a famous win. But Karim Bellarabi had other ideas. The Berlin-born winger secured the draw at the death, as he converted via a lovely finish to the keeper’s left from six yards out.

Here’s the table after seven weeks: 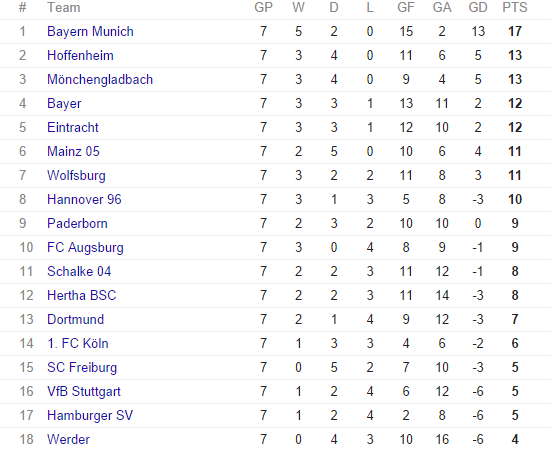