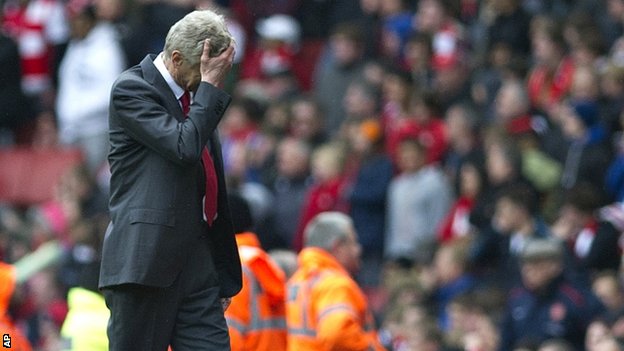 In total, Arsene Wenger has spent £61 million this transfer window alone. Here’s the sad part: it may not be enough to put up a successful league title challenge this season.

When you take a look at Arsenal’s best XI with all players fit, it can be argued that the Gunners can muster up a serious title challenge. This has been the issue with Wenger’s sides in recent years: when they have all their players fit, they’re exciting to watch. But when injuries strike, the great performances put on pre-injuries all are for naught, because the players selected to build on the success just cannot produce at nearly the same level. Squad cohesiveness takes a massive hit.

Looking at teams that have won major honors in the past two seasons, a commonality they shared was having highly-competitive squads bursting at the seams with quality players capable of picking up the slack in the event of an injury and keep momentum going. A good example of this would be Manchester City. If Alvaro Negredo and Sergio Aguero were to suffer injuries, two world class strikers in Edin Dzeko and Stevan Jovetic would come in and perform almost as well as the aforementioned duo. And here’s what other squads have spent to improve this summer: 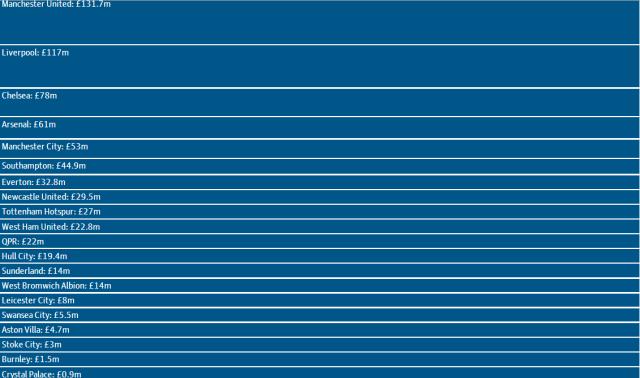 Now, I am not saying that Wenger hasn’t tried to improve Arsenal’s squad depth this season; the signing of David Ospina, the starting goalkeeper for Colombia at international level, gives Wojciech Szcsesny stiff competition between the sticks. My main issue is that Arsenal does not do this for other positions within the squad.

Kieran Gibbs’ injury history is a cause for concern, as he has never gone a full season without suffering some sort of knock. I’m surprised that Wenger looked past acquiring another left back for that very reason. Furthermore, Arsenal have not had a powerful defensive midfielder since Gilberto Silva and it seems ludicrous for them to believe they can contend without one. If you want to win a title, a defensive midfielder is mandatory, not optional. Wenger has attempted to rectify this situation, but to no avail.

Then, we have the main problem area, striker. I will say this about Olivier Giroud: in the current system Arsenal employ, he does a really good job in holding up the play and bringing others in, which makes him more of a team player rather than a poacher in the box. Yaya Sanogo has some potential but placing him as the only other striker in the squad is a huge risk and puts a huge amount of pressure on him. It likely won’t end well.

I admire that Wenger has kept faith in the former Montpellier man despite constant scrutiny from the media and fans, but the fact remains that Arsenal are without a quality backup striker. The Gooners cannot just stick Sanchez, Lukas Podolski, or Theo Walcott up top thinking they will work miracles. A proper out-and-out striker in addition to Olivier Giroud is needed for Arsenal to seriously challenge for honors.

So why hasn’t Wenger built a squad that can be compared to Chelsea or City? People tend to point to Wenger’s unwavering faith in the players he currently has as one of the main reasons for this. It is admirable that he would place so much belief in his players, especially through the troubled times like injuries (or in Tony Adams’s case, alcoholism). Whether you love or hate Arsenal, you have to respect the fact that Arsene Wenger has his players’ backs. And while that’s admirable, it has gotten in the way of Arsenal getting some major silverware in the past few years.

There has to come a time where Wenger realizes that not everybody is worthy of that faith. This philosophy can be both a blessing and a curse, so if Arsenal are to challenge for major honors, it cannot be expected that all the players he defends will repay that same faith.

The final days of this transfer window could very well make or break Arsenal’s season. The current Arsenal squad could do with a fresh few additions to help build it further. Rumors of William Carvalho, Alessio Cerci, and Adrien Rabiot have gotten Arsenal fans excited.

However, excitement doesn’t win trophies. Unless Arsenal are active in these last few days of the transfer window, don’t expect them to challenge for major awards this season.

Despite all the improvements at Arsenal these last few years, Wenger’s squad is still a tier below the main competition for the league title this season, meaning that the next year could look an awful lot like the past nine.