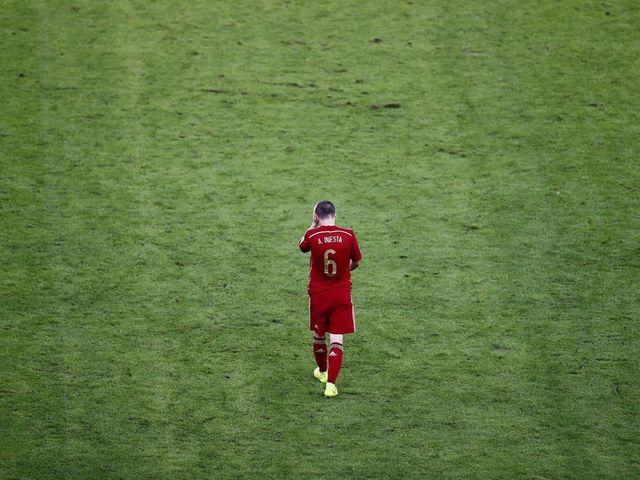 This is where we are with Spain. The old generation is done. But there is hope.

The cupboard isn’t bare for the Spanish national team. While this new generation probably won’t eclipse the achievements of the old (and if they do, everyone should really focus on how Spain got this good at producing talent like this), they are worthy successors, plying their trades for Europe’s biggest clubs.

Iker Casillas has more than likely played his last game, but Manchester United keeper David De Gea is a good replacement. (In fact, had he not broken his foot in training, he might have started over Casillas against Chile.)

On the defensive side of things, Real Sociedad’s Iñigo Martínez can join up with Barcelona’s Marc Bartra in the center while Cesar “Dave” Azpelicueta, Dani Carvajal and Martin Montoya can battle it out for right back duties. Over at left back, Sevilla’s Alberto Moreno, who is also a target for Liverpool, is the main cause of optimism.

Ahhh, but who can replace Xavi, Xabi and Iniesta, you ask? Have no fear. Spain are plenty stacked there as well.

Atletico Madrid’s Koke is already on the senior squad at 22, while Bayern Munich’s Thiago Alcantara only missed making the squad due to injury. Both players had awesome seasons for their clubs, and Vicente Del Bosque has been raving about Koke in particular, saying he’s the only one on the squad right now who’s hungry for success. (Which begs the question of why he isn’t played more.)

Much hated Sergio Busquets is also only 25, and when he isn’t being deployed as a center back, Bayern Munich midfielder Javi Martinez can be a defensive force in the middle. As someone who has wanted to see what a Martinez – Busquets midfield combination looks like for quite some time, the recent international retirement of Alonso would make me giddy. That’s not happening yet, however; even though it appears as if he is not well-liked in the Spanish dressing room, the defiant Alonso has stated he is not yet retiring from international football, going so far as to say “I’m still not at that moment, I want all this [in Brazil] to end as soon as possible, go on holiday, disconnect a little and then decide things with time. Right now is not the time.”

Real Madrid’s Isco may have regressed in his club’s pecking order, but his talent is unquestionable. Long seen as the Iniesta to Thiago’s Xavi, he is mesmerizing on the ball, able to create chances out of nothing. (He had 5 goals in his first month and a half at the Bernabeu.)

I would be remiss if I didn’t include Cesc Fabregas here. The talent is clearly there, but as someone who suffered with Cesc at Barcelona for three seasons, he can be mentally weak and erratic. Cesc never fit in at Barcelona – whether it was because his best position was Messi’s or because he was a locker room cancer is up for debate – but it’s clear Vicente Del Bosque doesn’t like the player as well. However, Fabregas recently moved to Chelsea and to a league that showcased him as the greatest attacking midfielder of the modern era. It will not surprise me if Cesc has a 20 goal, 20 assist season with Jose Mourinho, and those numbers are hard to ignore.

At the forward spots, Real Madrid’s duo of Alvaro Morata and Jese join up with Barcelona’s Gerard Deulofeu to create a quick, mobile front line. Prior to his injury, Jese was a revelation at Madrid, sometimes outshining his more expensive teammate, Gareth Bale, while Alvaro Morata is a target of seemingly every big EPL team (and Tottenham).

Meanwhile, Deulofeu impressed at Everton on his loan spell, becoming Roberto Martinez’s super sub before injuries derailed his campaign. He is back at Barcelona now, a key part in Luis Enrique’s plans.

While the present looks bleak for Spain, the future is very bright. Whether that future includes Diego Costa is another question for Vicente Del Bosque to answer.

The 2014 World Cup, fairly or unfairly, will define Diego Costa in Spain’s eyes. With young forwards Gerard Deulofeu, Jesé, and Alvaro Morata all progressing nicely, Spain’s new boss (or del Bosque, if he wants to stay on) will probably view Costa as surplus to requirements in 2016 and 2018–but in part for reasons out of his control.

Any possible adjustment process was overlooked when Costa elected to join la Roja, replaced by excitement and the overwhelming perception that Spain were just adding to the arsenal. What could possibly go wrong in securing the services of a 25 year-old who had scored 56 goals in all competitions since August 2012?

Lots, apparently. For one, Costa looked awkward, disengaged, and plain frustrated in his

two World Cup games–routs handed down by Holland and Chile, respectively. He mustered five shots in two games–zero on target–and was dispossessed the same number of times. Perhaps his hamstring was still giving him problems, but at any rate, Costa lacked the aggression and intensity that made him so fun to watch at Atlético. A completely different player.

But we cannot overlook the effect that Spain’s tactics had on Costa. At Atlético, Costa would throw himself into the final third with reckless abandon, going directly for goal. The attack centered on him; his explosiveness and finishing abilities swung many game pendulums in Atléti’s favor. But the national team does things, well, a bit differently. Play is concentrated in the midfield, and all movements and runs are deliberate and carefully calculated. That doesn’t mean it’s bad or it’s an incorrect style to play–no matter what some may tell you, tiki-taka is beautiful when done correctly–but it is most certainly not a preferable style when a volume shooter (only four players averaged more shots per game in La Liga) and scorer (only Ronaldo and Messi scored more goals in league play) like Costa is on the pitch.

Now his international career is at a crossroads. Costa’s chance with the Spanish team may have lasted a mere two World Cup games–depending on the progress of Deulofeu/Jesé/Morata, he may not even be selected for Euro 2016, let alone Russia 2018. And it may not matter who is in charge when the teams are announced–VdB, Paco Jemez, or even Roberto Martinez could all pass on the Chelsea-bound forward in the next four years.

Football can be a cruel, cruel game.

eh
View all posts by jerblaber →
This entry was posted in 2014 FIFA World Cup, FIFA World Cup and tagged spain. Bookmark the permalink.

1 Response to Bridging the Gap: Present Spain vs. Future Spain