Belgium kicked off its first World Cup in 12 years with a 2-1 victory over Algeria on Tuesday, but it was far from a cakewalk for the Group H favourites. Algeria led through a Sofiane Feghouli penalty after 25 minutes and were more than willing to concede possession to an uninspired and perhaps rattled Belgium. But coach Marc Wilmots made two key substitutions that turned the match on its head, as he inserted Dries Mertens at halftime and the much-maligned Marouane Fellaini five minutes after the hour. The latter equalised through a majestic header (or “fro’er”) in the 70th minute, but the former’s goal ten minutes later sealed the win for les Diables Rouges.

Let’s go to the 80th minute. Feghouli–the man whose penalty was, at this point, enough to salvage a point–is in possession for Algeria in the attacking third, a place his side did not frequent in this contest. Axel Witsel is directly in front of him, while Kevin de Bruyne is stationed to his left. 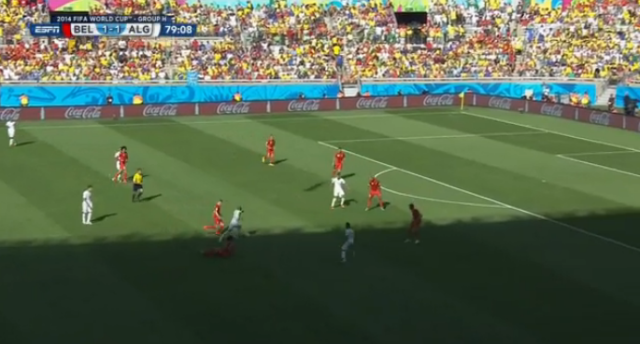 Feghouli is able to get past Witsel with ease, but this allows de Bruyne to give chase.

Here, we see the Wolfsburg midfielder has pried the ball loose via a diving stab with the right foot. The tackle is perfectly timed, and enough to dispossess Algeria’s #10 and a very creative player in his own right. But here’s the stroke of genius in this play: de Bruyne is able to slide the ball over to Jan Vertonghen. It is then Vertonghen who, in an attempt to make up for the foul that put Belgium down a goal, delivers a ball that finds a breaking Eden Hazard. (Nice attempt by Feghouli to draw a foul, also. Imagine if he had succeeded.) 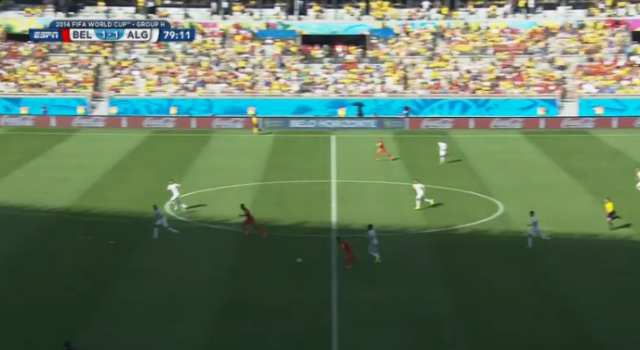 The counterattack begins. Hazard pushes forward at a blistering pace, drawing the defence to his side of the pitch, which leaves Dries Mertens on an island to Hazard’s far right.

See what I mean by “on an island”? Hazard has three defenders forming a triangle around him, and a further two flanking him. If he attempts a short pass to Divock Origi (directly to his right), it’s an interception and an Algerian counter the other way. So what does Hazard do? He relies on his dribbling prowess and his quickness to get an isolated Mertens into a good position. Patience is key here.

That’ll do. Hazard’s left-footed ball catches the Algerian defence off-guard–it’s in no-man’s land for them. But not for Mertens.

Hazard’s ball is low and straight, thus allowing Mertens to move right in at the edge of the box. The Napoli winger gathers, steps up, and with a sniper’s accuracy, unleashes one past a helpless Raïs M’Bolhi. Belgium 2-1 Algeria.

Big goal for Mertens (obviously), and a great way for Belgium to kick off Group H. Marc Wilmots’ starting XI was the source of some controversy (the gamble on Nacer Chadli, in particular, did not pay off), and Romelu Lukaku was unable to break free during his 58 minutes of action. Lukaku was not his typical beastly self, most likely due to a lingering right ankle injury, so his fitness will be something to keep an eye on as the Belgians prepare for Russia on Sunday. Belgium lacked imagination at times and had trouble dealing with Algeria’s pressure at midfield, particularly through the first 45. But points are points, and Russia’s draw with South Korea later in the day put the Red Devils in control of Group H.