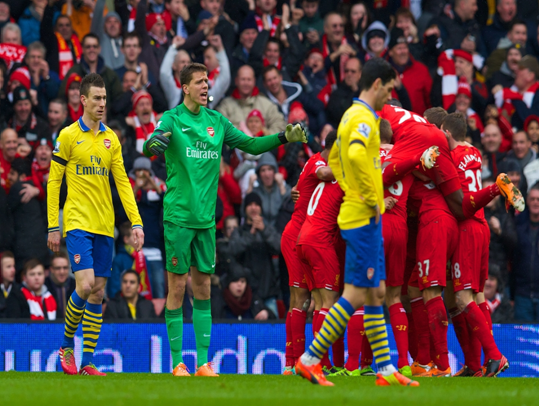 (Note: I apologize for not being able to keep up my previous share of posts on EDIZD. I’ve been writing on an intermediate basis for Back Page Football in the last month or so and I write on a weekly basis on Baller Mind Frame about the NBA. Plus I’ve been swamped with school so my posts for this site have dried up immensely. My honest plan was going to be to not post anything on this site until school was done in late April and get set for the 2014 World Cup but seeing as I have a bit of a break, I owe a post of some sort. I can’t promise how many more posts I can contribute for EDIZD until late April/early May but I’ll try to squeeze some in.)

If you managed to wake up bright and early to rest your eyes upon the TV for some SACCER, you were privileged to something special. The score line from this game was very much indicative of what happened at Anfield. This was an ass kicking of the highest order, a kamikaze of whirlwind attacking football from one side that brought the title leader to their knees. All that wasn’t accomplished on Liverpool’s end was a clean sheet, but this was a masterstroke fueled by perhaps the next generation of Liverpool FC.

Lineups and formations for the two weren’t unexpected. Liverpool lining up in what perhaps could be best described as a 4-1-2-3 with Gerrard playing his customary role playing just in front of the back four in Toure/Cissoko/Skrtel/Flanagan. Coutinho and Henderson combined played up front with Coutinho the more adventurous of the two. Up top lied the three of Suarez/Sturridge/Sterling. On Arsenal’s end was their customary 4-2-3-1 with Alex Oxlade-Chamberlain getting his second straight start after his scintillating performance vs Crystal Palace but this time in a more advanced position alongside Ozil and Cazorla.

Well, a lot of things happened, quite a lot. It was a fast beginning for Liverpool as a surgical Steven Gerrard cross off of a free kick position on the left hand side was finished by Martin Skrtel which opened the flood gates for Liverpool less than a minute in. There’s been plenty of discussion as to the importance of Steven Gerrard, what his role should be and the tactical challenges that he sometimes brings. Those are valid concerns, and it’s something I even dedicated a few hundred words to http://backpagefootball.com/steven-gerrard-and-the-fascination-with-change/69041/ . But the idea that Liverpool are better off without Gerrard is a bit much considering the shaky depth they have on their side, something that was exposed during the Christmas break. His crosses are still delightful, and the first two goals were in part the result of Gerrard flinging in crosses inside the box for Skrtel.

The second for Skrtel was more so his individual exploits in the box. 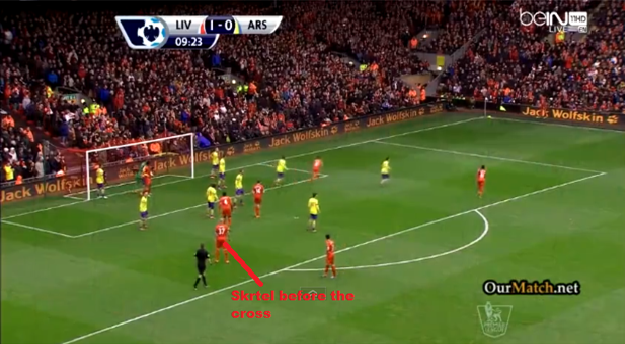 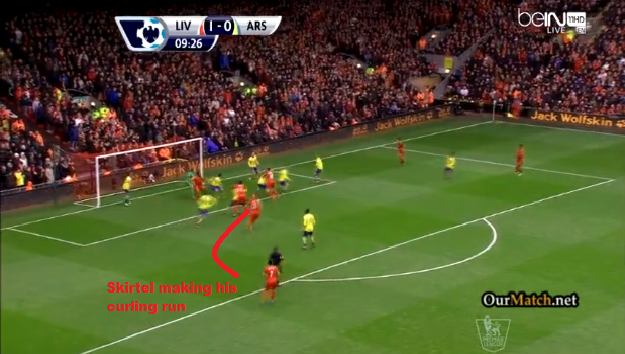 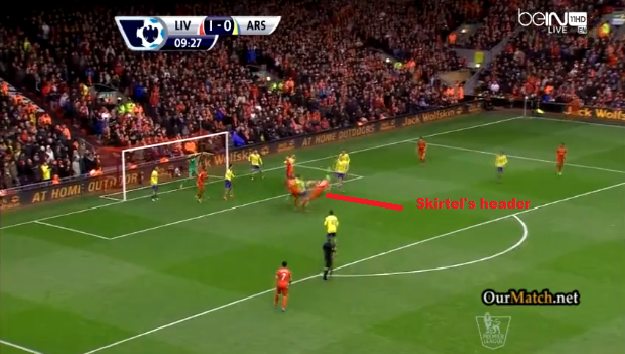 Skrtel has scored all of his goals in these type of situations this yr. Scoring two goals off of dead ball situations in one game is something that won’t happen often, and luck has some parts in what can happen in these situations.

Sterling’s 3rd goal was a mere tap in, the by-product of Jordan Henderson pressuring Mesut Ozil in the midfield, starting a counter attack that led to Suarez’s tasty squared pass for Sterling. The truth is Liverpool easily could’ve scored four or five goals in this twenty minute span. Toure shanked an open net (Kolo Toure did something wrong, water is wet) off of Suarez’s wonder self-volley strike that hit the post, and Sturridge didn’t complete his breakaway chance on Wojciech Szczesny just a minute before.

Sturridge though didn’t have to wait long though as he potted away Liverpool’s 4th goal off of Coutinho’s  nice through pass. The goal scoring dried up at that point, with Sterling and Arteta’s goals coming in the second half when the match was all but assured and done.

You Can Win With Kids:

Suarez and to a lesser extent the SAS partnership have understandably been the leading story of the Liverpool season. Suarez in particular is having a remarkable season, the best the Premier League has seen in ages, and he himself was as good as one could be without scoring a goal, but the trio of Coutinho/Sterling/Henderson were outstanding, each bringing qualities that highlight their importance for Liverpool going forward.

Henderson has been a great distributor of the ball for Liverpool this yr, and the link up plays he’s provided for the likes of Suarez and Sturridge are a staple for Liverpool viewing watching. He was 28-31 in midfield passes, and he created numerous chances overall. 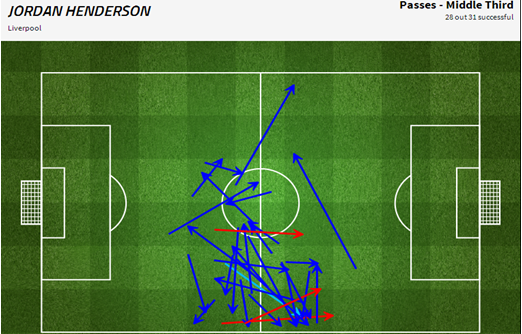 Henderson according to Whoscored had 3 key passes and the Flanagan to Henderson/Henderson to Flanagan were the second highest Liverpool passing combination at ten each.

Coutinho might’ve been the best player on the pitch and perhaps what’s even more promising with him is the potential he’s displaying as more of a box to box midfielder than a number ten. 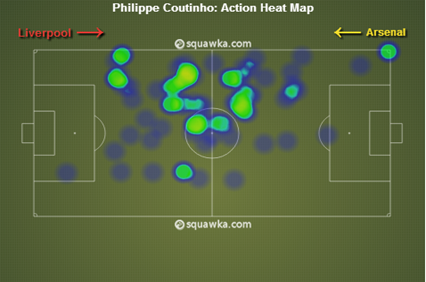 He created five chances in open play and set up Sturridge for his goal. Perhaps an answer to Chelsea having the likes of Oscar and Willian as attacking midfielders who’re very adapt defensively, having two players like Coutinho and Henderson can allow Brendan Rodgers to resist the temptation of having to play a back three to accommodate the SAS duo.

Sterling was magnificent on the left wing, playing perhaps the best match he’s ever played. He registered a 9.46 rating from WhoScored, scoring two goals, producing three dribbles and had a 100% shot accuracy (5-5). It was a glimpse as to how dangerous he can be when his gifts in terms of technical ability and his speed on the flanks worked in total harmony. He gave Arsenal major headaches, especially their back four. What’s scary with the trio is they’re still not at the peak of their powers, Sterling especially considering he and I are the same age.

Heading into today’s fixture Arsenal had a .553 TSR and a PDO of 1123, numbers that aren’t exactly very indicative of a title leader. However they’ve produced a blistering .651 TSR in the EPL since the beginning of 2014 before the Liverpool match. Their PDO over that time was 1143, which would be even higher than Man City’s season long 1136. Looking at a 5 game sample size can be a bit harry in terms of putting stock into a team’s TSR, but what lies ahead for Arsenal is trouble. Here’s Arsenal’s fixtures until the beginning of April:

With the injuries that Arsenal have been facing, having to go navigate through this hectic of a schedule is almost unfair. Arsenal to this point have survived every challenge put past them in ending a near decade cup drought, earning plaudits for displaying a steel that had previously been absent. Their shot ratio numbers are rather pedestrian, similar to Manchester United last year but their attacking methods to some extent accentuate a below .560 TSR with the amount of attacking third passes/touches they produce (which has been correlated to future goals scored).

Liverpool were at their devastating best on this day, playing at a pace that Arsenal simply couldn’t keep up. Arsenal looked slow, Arteta and Wilshire looked overmatched, and they couldn’t muster up anything attacking wise on this night. Alex Oxlade-Chamberlain for the second straight week was Arsenal’s best player, though this time it carries rather insignificant meaning.

Brendan Rodgers deserves credit for the pressing that Liverpool displayed, and though I’ve argued about how much meaning formations and tactics really have, Rodgers deserves some levels of credit for the way he’s brought up Sterling and put him in the right place to succeed. The idea that Liverpool are now suddenly in the title race again as a result of their performance is pushing it to some extent. Having to make up six points to catch Chelsea is a tough thing to ask though strangers things have happened. Liverpool do play Manchester City on April 12 as well as Chelsea at home in late April. Liverpool are the favorites to nabbing the last Champions League spot, and who knows, perhaps the miracle happens and Liverpool will be able to raise the English Premier League trophy on their home grounds when they play Newcastle United on May 5.

Marseille supporter, #FancyStats supporter. Troller of all things Twitter. I write words and hope they make me sound SMRT
View all posts by Moesquare →
This entry was posted in English Premier League, Features and tagged Arsenal, Liverpool FC, Premier League. Bookmark the permalink.